She is an actress, comedian, singer, and voice artist.

Patti LuPone is a happily married woman. She gets married to Matthew Johnston who is a cameraman by profession.

The beautiful couple met on the sets of LBJ: The Early Years in 1987. Soon after, they fell in love and started dating each other.

On December 12, 1988, the pair tied the wedding knot upon the stage of the Vivian Beaumont Theater at Lincoln Center. They are blessed with a son named Joshua Luke Johnston, born on November 21, 1990.

While studying at the Juilliard‘s Drama Division, she dated actor Kevin Kline. They both graduated together in the year 1972.

In 1983, she was in a relationship with Canadian ice hockey player, Ron Duguay. She also encountered musician Paul Stanley. 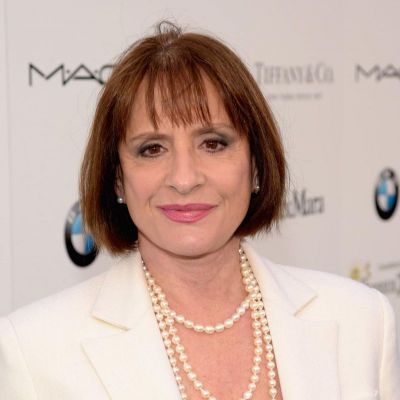 Who is Patti LuPone

Patti LuPone is an American actress, comedian, singer, and voice artist. She is best known for her role as Elizabeth “Libby” Thatcher on ABC series, Life Goes On from 1989 to 1993.

LuPone recently wrapped her role in an upcoming young adult fantasy film, The School for Good and Evil. It is set to be released in 2022 on Netflix. Her other upcoming project is the comedy horror film, Disappointment Blvd.

She is the daughter of Angela Louise Lupone (mother) and Orland Joseph LuPone (father). Her father is a school administrator and English teacher at Walt Whitman High School in Huntington, Long Island.

Similarly, his mother is a library administrator at the C.W. Post Campus of Long Island University. She has twins brothers named Robert LuPone and William LuPone. Her older brother, Robert is also a Tony-nominated actor, dancer, and director whereas William is an Ecologist.

She is of American nationality and belongs to mixed (Italian-American and Roman Catholic) ethnicity.

In 1972, she graduated from Juilliard with a Bachelor of Fine Arts degree.

LuPone then made her first TV appearance on the crime drama series The Andros Targets as Sharon Walker in 1977. The following year, she made her theatrical film debut in an uncredited role in the drama film King of the Gypsies. Her notable movies are Witness (1985), Driving Miss Daisy (1989), Mamet’s Heist (2001). Similarly, she guest-starred in Tv series like Law & Order, Will & Grace, Ugly Betty, Oz, 30 Rock, and so on.

Patti is also popular for her mezzo-soprano vocal range, performed in numerous New York concert productions of musicals. Her performance in Juli Covington’s song, “Don’t Cary for Me Argentina” at the Grammy Awards was released on the 1994 album Grammy’s Greatest Moments Volume IV. In July 2012, her live concert special film, An Evening with Patti LuPone was filmed and released in November 2012 on SerhTv. com hosted by Seth Rudetsky.

Aside from this, she has written a memoir titled ‘Patti LuPone: A Memoir’ where recounts her life and career from childhood to the present. The book was published in September 2010.

Wood has managed to maintain a clean profile to date. she hasn’t been part of any sorts of rumors and controversy matter that create a huge buzz in the media.

Patti is living a lavish lifestyle. Since 1972, she has been active in the entertainment industry.

As of 2021, she is estimated to have a net worth of $8 million. Her salary, real estate, and other earning are still under review.

The actress stands at the height of 5 feet 2 inches tall and her weight is about 54 kg. Likewise, she has a hazel pair of eyes and dark brown hair color.

However, she often tends to dye her hair in different colors.