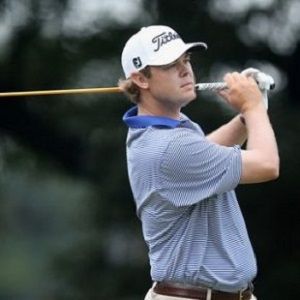 What is the relationship of Patton Kizzire?

Patton, with his amazing personality, has attracted a large number of admirers. But there is only one whom he wants in his life. And that is his wife Kari Elizabeth Hodgdon. The lovebirds tied the knot on October 17, 2015. There is no any other affair he has been involved into.

Presently, they are happy with each other’s company and have no sign of separation.

Who is Patton Kizzire?

Patton Kizzire is an avid golfer. As of now, he is one of the talented professional golfers. Furthermore, he has two major professional wins till now. He has been playing golf professionally since 2008. Patton is currently on a PGA tour and makes a large amount of earning from it. In 2015, he won the “Web.com Tour Player of the Year”.

Presently, he is ranked 130 by Official World Golf Ranking. The highest rank he has reached is 54.

Patton was born on 3 March 1986 in the city of Montgomery in the state of Alabama. His nationality is American and his ethnicity is North American.

Although he was born in Montgomery, he was raised in Tuscaloosa. He spent his childhood there. Patton was born to the parents, Maxie and Sally Kizzire. Growing up, he grew a massive passion for playing golf.

As part of his education, he joined Auburn University. In 2008, he graduated from there with a degree in Business. Although he graduated with a Business degree, his focus was on playing golf. He played his collegiate golf there.

Patton initiated his golf career from his college days. During his college days, he earned all-Southeastern Conference first-team honors in 2006–07. Likewise, he also won the SEC championship in the same year. In 2003, he participated in U.S. Junior Open. He finished third in it.

Afterward his graduation, he turned professional and a full-time golfer. His professional wins include “Utah Championship” and “News Sentinel Open” in 2015. Furthermore, in 2016, he qualified for U.S. Open but missed the CUT. Presently, he is on PGA Tour.

Patton Kizzire: Salary and Net Worth

Patton likes to focus on his career. He avoids any media rumors and controversies. His effortful work keeps him away from any criticism too.

Patton has a height of 6 feet 4 inches. His body weighs 95kg. Furthermore, he has brown hair and blue eyes. Besides these, his body measurement is not known. Also, his dress size and shoe size are not known.

Furthermore, also find out more about the early life, career, net worth, relationships, and controversies of professional golfers like Jessica Korda, Peter Alliss, and Michelle Wie.