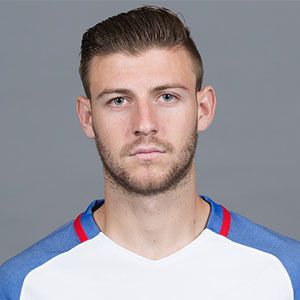 I am so happy to be marrying the girl of my dreams. I love you more than words could ever describe and can't wait for our life journey!

Dashing and adorable Paul Arriola is engaged to his girlfriend. He made it official about their relationship posting a photo of them on Twitter. They both have a YouTube channel known as Kickin’ It was Akela and Paul.

Who is Paul Arriola?

Paul Arriola is a professional American soccer player. Currently, he is playing for the Mexican club Tijuana in Liga MX and plays as a winger. He has trained himself from IMG Soccer Academy before coming into professional soccer.

Paul Arriola was born February 5, 1995, in Chula Vista, California, United States. He is of Mexican-American ethnicity as his grandparents migrated to the United States from Mexico. His parents are Art Arriola and Dawn Arriola.

Talking about his early life, Paul grew up in his hometown with his family. From his childhood, he has a keen interest in soccer as he starts playing from a young age. Concerning his education, he joined  Mater Dei Catholic High School in Chula Vista, CA.

As a youth, Paul began his career with IMG Soccer Academy in 2010. After training with them he moved Arsenal FC (California) from 2011-2012. He got an offer from LA Galaxy to join them in 2012 but he refused it and joined  Club Tijuana of Liga MX.

Asking about his choice for Tijuana over LA Galaxy he said, “I felt that Xolos was the place for me. I love the club, it’s my home team and the people down there are wonderful.” He made his professional debut for the club against Club América on July 6, 2013. He also scored a goal in that match which ended up a 5-2 victory. Paul is still playing with the same club.

Paul made his international debut in the 2011 FIFA U-17 World Cup. He was also in the squad of the United States U18 for the friendly game against France and Uruguay. He has also played in the 2015 FIFA U-20 World Cup and scored a goal against Newzealand in group stage match.

Finally, Paul got the opportunity to play for the senior side against Puerto Rico and also netted a goal and provide an assist.

Paul is in his starting phase of a professional career. He has shown how talented he is. He doesn’t have any awards yet, but in the near future, he would definitely achieve it.

Paul Arriola has been a real success for his club as well as for the country. He is earning a quite good amount of money as his salary which is increasing in recent days. However, his net worth is still unidentified.

In the first group match of the Gold Cup, Paul couldn’t give his best for the country. For his poor performance, he faces many criticisms. Paul Arriola hasn’t been the topic of any drastic rumors yet. It seems like he just concentrated on his work rather than make any statement for any controversy. As of now, there isn’t any controversy about him.

Paul Arriola is a good looking young guy with a height of 5 ft 6 inches and weighs 66 kg. He has attractive hazel blue eyes and brown hair.