Paul Campbell is a popular Canadian actor. He is married and a father of one kid.

Paul Campbell is currently married to his wife Lorie Metz Campbell. Lorie is also an actress and the two have been together for quite a while. They dated for a while and got married on the 25th of June, 2009.

The two also showed their love for each other by getting married a second time in 2011 even though they were still married at the time.

The lovely has also had a son named Kingston Campbell together. Kingston was born on the 26th of April, 2016 through surrogacy.

Paul hasn’t shared anything regarding his past relationships and girlfriends as of now. 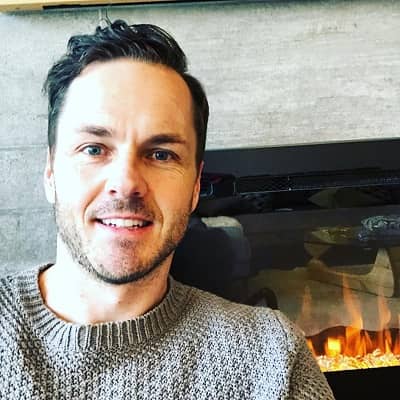 Who is Paul Campbell?

Paul Campbell is a popular Canadian actor. He is best known for his memorable roles in shows such as the re-imagined Battlestar Galactica, Spun Out, and Play the Game.

Paul Campbell was born on the 22nd of June, 1979 in Vancouver, British Columbia, Canada. As of now, his age is 42. His nationality is Canadian but he has not revealed his ethnicity as of now.

Paul was born to his father Bruce Campbell and mother Karen Campbell. He grew up in White Rock, British Columbia. Other than that though, he hasn’t revealed much else about his childhood. He has also not shared anything regarding his siblings, so he might be a single child.

Campbell attended and graduated from Semiahmoo Secondary in 1997. After this, he worked and pursued skills in carpentry for almost four years. But after that, Paul changed his mind and attended theater school for two years, and graduated.

Paul started his career in acting shortly after graduating from theater school. His first role was in the 2002 TV film We’ll Meet Again. After this, he acted in small guest roles for Tv series such as John Doe, Black Sash, and The Dead Zone.

And after gaining some experience through these roles, Paul landed his first big role in the re-imagined Battlestar Galactica.

He portrayed the supporting character Billy Keikeya from 2004 to 2006 on the show. The role really helped his career as well because Paul became a lot more popular after this.

In the following years, he acted in movies such as The Long Weekend and Severed. Paul continued acting in movies and also guest-starred in a few TV shows.

In 2008, he landed his next popular role in the TV series Knight Rider. Paul portrayed the main character, Billy Morgan, in the series from 2008 to 2009.

Following that he also appeared in the romantic comedy Play the Game. In that role, he appeared alongside other popular actors such as Andy Griffith, Doris Roberts, and Liz Sheridan.

He also acted in a number of other comedy movies and series in the following years. Some of his well-known appearances in the 2010s were in Dirty Singles, Preggoland, and Man Seeking Woman among others.

His most recent appearances were in 2020’s TV films Weekend Every Weekend and Christmas by Starlight.

Paul has won the 2005 Leo Award for Best Lead Performance by a Male for his role in Ill Fated. He was again nominated for the 2019 Leo Award for his work in 2018’s A Godwink Christmas.

Paul has gathered a net worth estimated to be roughly 5 million USD as of 2022. He hasn’t shared any details regarding his annual salary as of now.

Paul stands at a height of 6 feet 2 inches tall but he hasn’t revealed his exact weight. Still, we can see from his photos that he is quite good-looking and has a slim and balanced physique. His hair is brown and his eyes are blue in color.

Get to know more about the lives of Max Walker and Evan Williams as well.