Paul Costabile is happily married to the singer and songwriter, Christina Perri.

His wife, Christina and he had been dating each other 4 years before his marriage. After a long-term relationship, he got engaged with the singer on 22nd June 2017. They shared the information via his Instagram post.

Eventually, the couple got married on 12th December 2017. The wedding took place in New York City. Together the couple is blessed with a daughter; Carmella Stanley Costabile (b. 17th January 2018).

They also welcomed their second daughter in November 2020. However, their daughter was stillborn and couldn’t survive. Perri shared the sad news via her Instagram post. 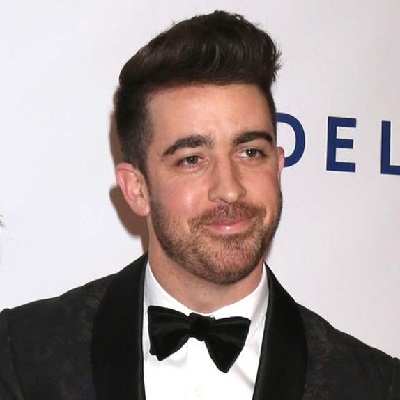 Who is Paul Costabile?

American Paul Costabile is a host, comedian, and producer. Costabile is renowned as the better half of the singer and songwriter, Christina Perri.

Paul Costabile was born on 1st June 1987 in Hilldale, Michigan. He is of Greek-Latin ethnicity with Italian ancestry.

To date, she has not shared any details on her family background including father and mother. However, his family is originally from Italy. He has a sister named Lauren.

Moving to his academics, he is an alumna of William Paterson University. From the university, he graduated with Honors in Arts and Communication.

In 2007, he started his career as a standup comedian in the theatre, The Upright Citizen’s Brigade Theatre. Following that, he started broadcasting in the various talk show in Times Square, NYC.

After two years, in 2009, he created his own Late Night Talk Show, Gorilla Late Night. Later, he started working for the radio network, iHeartRadio as a host. For the radio station, he hosted the Now Signature, off-the-cut artist interviews.

Also, he has worked as the writer, host, and produced various videos for Madison Square Garden and The Hollywood Reporter. Following that, he hosted Animal Planet’s Risk It for the Biscuit. Also, he conducted interviews in various Award shows like The Grammy, The Oscars, and SAG Awards.

Also, he happens to be the latest presenter of the game show, Beat the Clock. Besides that, he also hosted the show, Doodle Wars on NBC’s digital network, Bluprint.

Talking about net worth, his wife, Christina has an estimated net worth of $4 million. Her net worth is attributed to her career as a musician and songwriter.

He has blue eyes with brunette hair. He stands at a decent height and weight. However, details on his body stats are not available.