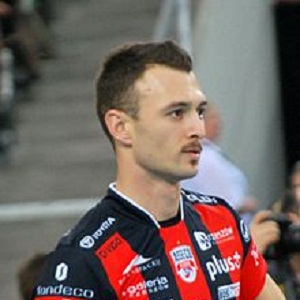 I just wanted to thank everyone who was a part of this past weekend, we couldn’t have asked for a more perfect wedding. Dad, I love you and wish you were there to see it, it was everything you were looking forward to.

Paul Lotman is a married person. After being in the relationship with Jasmin for several years, they finally got married on August 8, 2011.

As a loving couple, they have already welcomed a child named Leif Albert Lotman. Currently, he is staying happily with his wife and children.

Who is Paul Lotman?

Paul was born as Paul Michael Lotman on Nov 3, 1985, in Lakewood, California, U.S.A. His ethnicity is caucasian.

As per parents, his father Albert Lotman died in 2011 and his mother’s name is Kathleen Lotman.

He was raised with two older brothers, Mark and Steven, and an older sister Shelley.

Paul Lotman professionally started playing volleyball in 2011 after he went to Polish club Asseco Resovia Rzeszów. With the same club, he won three titles of Polish Champion in 2012, 2013 and 2015.

He left Asseco Resovia Rzeszów in May 2015. In June 2015, he was associated with German team Berlin Recycling Volleys. He made his Olympic debut with U.S national team in the 2012 Olympics.

At present, he is associated with Calicut Heroes. He joined them in the year 2019.

Once there was a rumor that Paul died in an accident, but, later on, the rumor found to be false after Paul posted about his safety through Twitter.

At present, he is also not having any rumors regarding his professional and personal life.

This talented player has an estimated net worth of $500 thousand.

Regarding Paul Lotman’s body features, he has blue eyes and black hair.