Posted on May 1, 2022 | In Dating , Interesting Facts , Relationship
Share this 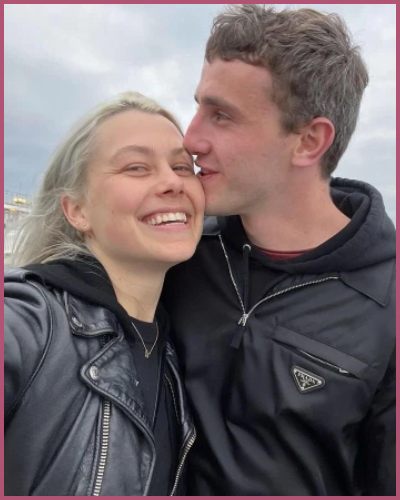 When did Paul Mescal pop the question to Phoebe Bridgers?

Phoebe Bridgers and Paul Mescal got engaged on Thursday, as per reports speculated over the internet. The Day After Tomorrow singer, 27 reportedly identified Paul as her fiance over the weekend at the California music festival, Coachella.

Paul rocked in a black shirt with a shot and a pair of white shorts for the festival. Similarly, he completed his ensemble with white sneakers. Similarly, Paul is enjoying Phoebe’s performance alongside Daisy Edgar-Jones, Phoebe’s ‘Normal People’ co-star, at the event.

So far, the two have been silent about the engagement rumors. As a result, it’s unclear whether they are engaged or not.

What’s really going between them?

Paul was spotted for the first time since the engagement rumors, heading out in New York City on Saturday, April 30. The actor appeared to be in good spirits as he went for a stroll with his stylist pal Sarah Edmiston over his shoulder.

Mescal rocked in a plant-embroidered sweater and grey chinos. He finished his ensemble with sunglasses and black and white sneakers.

In the year 2020, Phoebe and Paul were first linked. The two walked the red carpet together at the LACMA Art+Film Gala in November of the same year.

Paul had previously worked on the singer’s music video for the song Savior Complex, which he had worked on before their red carpet debut. During an interview, Bridgers referred to him as “the cute boy”.

Months later, the pair made their romance public on Instagram with a lovely windswept photo. Before they went public, the actor publicly admitted to having a girlfriend. He said,

“To have someone to lean on through such a mad, mad time has been invaluable. Really, I don’t know where I’d be without her.”

Phoebe has always been honest about her sexuality and is openly bisexual.

Also read “What is going on between Bianca Wallace and Alice Evans?”

Phoebe Bridgers is a popular American singer-songwriter, guitarist, and producer as well. Bridges is widely famed for her debut album “Stranger in the Alps” followed by “Punisher”.

Also, Phoebe is famous for her membership in the musical groups Boygenius (with Julien Baker and Lucy Dacus) and Vetter Oblivion Community Center (with Conor Oberst). See more…