NBA player Paul Millsap is married and a father of two. 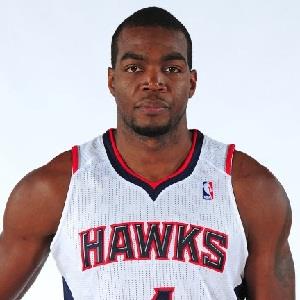 Tonight we had more energy than in any other game this season. This game meant a lot to us

I don't know why we win here. It's been raining since we got here, something like it gets back home. Maybe that's got something to do with it.

Reflecting on the personal life of Paul Millsap is a married man. He is married to his longtime girlfriend LaToria Scott.

They are high school sweethearts. He is a father of two daughters, Pynona and Xylah are the names of his two daughters.

Who is Paul Millsap?

Tall and handsome Paul Millsap is an American well-known professional basketball player. He is best known as the player for Atlanta Hawks.  He plays from in a forward position wearing jersey number 4.

American professional basketball player Paul Millsap was born in Monroe, Louisiana on 10 February 1985. He is of African American ethnicity and has an American nationality.

His mother’s name is Bettye Millsap and his father’s name is unknown. He has one elder brother John and two younger brothers, Elijah and Abraham. They also play basketball at different levels.

After graduating high school, he attended Louisiana Tech becoming the only player in NCAA basketball history to lead the nation in rebounding for three consecutive years.

On 2 August 2006, he signed a rookie contract with the Utah Jazz and recorded a career-high scoring 32 points in a match against Boston Celtics in December 2008. He missed several games due to his injury to his knee.

On 10 July 2009, Portland Trail Blazers offered a four-year contract but the Jazz matches the offer sheet and kept him within the team on 17 July 2009.

He played for the team Jazz for around seven years and then he joined the Atlanta Hawks. On 10 July 2013, he signed a two-year contract with the Hawks.

On 18 March 2014, Millsap recorded a career triple with 19 points, 13 rebounds, and 10 assists against a winning match against Toronto Raptors. He signed a three-year contract extension worth $59 million to the Raptors in July 2015.

On 9 April 2016, he recorded a season-high 32 points and 16 rebounds in a winning match against Boston Celtics. He is now playing for the Denver Nuggets in a forward position wearing a jersey number 4.

His success in his career path has paid him well financially making his net worth estimated to be $45 million.

Except for the trade rumors, he hasn’t been in other rumors and suffered a controversy in his life.

Paul Millsap has a height of 6 feet 8 inches and weighs 117 kg. His hair color is black and his eye color is dark brown. His shoe size is unknown.