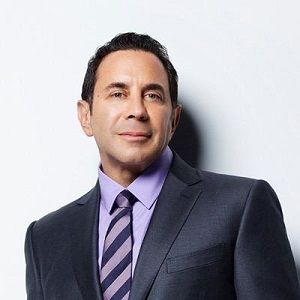 Paulina is already a living, breathing extension of our hearts and the love we have for her is absolutely unbelievable!' their statement went on.

She truly is a blessing, especially during such a tough year. Thank you all for your love and support and coming along with us on this this journey.

What is the relationship of Paul Nassif?

Paul Nassif is a married man. He exchanged vows with Brittany Nassif on 28 September 2019. In April 2019, he shared the good news that his wife Brittany was expecting. And in October 2020, Paul and Brittany had their first child, Paulina Anne.

Previously, he got married to Adrienne Maloof on May 2, 2002, and continued their marital relationship for 10 years. On November 8, 2012, they got divorced.

They have three sons; Gavin, Colin, and Christian. Colin and Christian are twins. He was seen with Miss Nevada USA Helen Sales after his separation from his wife.

Who is Paul Nassif?

Paul Nassif is an American plastic surgeon and television personality.

Paul Nassif is immensely famous for being a co-host of the plastic surgery-themed series ‘Botched’ with Dr. Terry Dubrow for three seasons.

He is also known for being a member of the American Society for Aesthetic Plastic Surgery.

Paul Nassif was born to American parents in the United States of America and was raised by his parents.

There is no information about his hometown and early life of Paul but, currently, he has settled down in Beverly Hills, California, United States of America.

Talking about the educational career of Paul Nassif, he, firstly, attended  Loyola High School, Los Angeles, USA, and then moved to the University of Southern California whereby, he got his degree in 1984.

After his graduation, he applied and joined the University of Health Sciences/Chicago Medical School for his medical education.

There, he only studied for two years and again joined the University of Southern California School of Medicine.

After his graduation in 1992, he got the opportunity to work as an intern at the University of New Mexico Health Sciences Center which was followed by his completion of facial plastic and reconstructive surgery fellowship at St. Louis University School of Medicine in 1998.

Paul Nassif initiated his career as an intern for the University of New Mexico Health Sciences Center and made himself one of the demanded doctors for facial surgery. But, apart from his work as a doctor, he also made himself popular as a Television personality.

He started to appear in some of the media outlets to discuss cosmetic surgery but, got his major breakthrough from the E! reality series ‘Botched’ whereby, he was a co-host alongside Dr. Terry Dubrow and also for  E!’s ‘Dr. 90210’.

Also, he appeared on ‘Entertainment Tonight’ and ‘Good Morning America’.

Thus, with the help of his talents and appearances, his net worth is $16 million as of 2022.

Is Paul Nassif involved in any rumors and controversies?

After his divorce from Adrienne Maloof, there was a rumor that he has a girlfriend during the year 2014. This news could not be confirmed.

Adrienne was angry when he was moving with a hottie and felt that the hottie was in the picture before her split with Paul.

He was also accused of child abuse and was under investigation by the LA Department of Children and Family Services.

In 2016, he was sued by a former patient for a botched nose job.