Paul Rudd’s marital status is married. He got married to Julie Yaeger on February 23, 2003. The couple has two children named Jack Sullivan Rudd and Darby Rudd.

Other information related to his affairs, past relationships are not revealed. 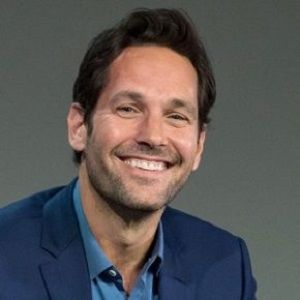 Puberty hit me pretty hard. All of a sudden, I woke up, and I had really curly hair

I love attempting to play real people. I like to try and have dramatic moments as well as comedic moments, and my favorite thing is when those two lines are blurred

I do like the idea that tomorrow I might find out that I'm going to be doing something that is completely unknowable today. I think it forces you to live in the moment in a very good way.

Who is Paul Rudd?

Paul Rudd is an American actor, comedian, screenwriter, television producer, and film producer. Paul Rudd is best known for his roles in the movies Clueless, The 40 Year Ols Virgin, Anchorman, I Love You, Man, and The Perks of Being a Wallflower.

Paul Rudd was born on April 6, 1969, in Passaic, New Jersey, the U.S. His full name is Paul Stephen Rudd. His nickname is Fred. The name of his father is Michael Rudd whereas the name of his mother is Gloria.

He has one sibling named Julie Rudd.

He was raised in Kansas. Both of his parents are from Jewish families. His nationality is American. His ethnicity is unknown.

He has been to Broadmoor Junior High School and later to Shawnee Mission West High School. After his graduation, he joined the American Academy of Dramatic Arts/West located in Los Angeles.

Talking about his career, Paul Rudd’s first film was as Jimmy in Runaway Daughters in 1994. It was a TV film. His first television appearance was in the NBC drama Sisters from 1992 to 1995 in which he played the role of Kirby Quimby Philby in 20 episodes.

He portrayed the recurring role of Bobby Newport on the television series Parks and Recreation from 2012 to 2015.

Paul was nominated for a Saturn Award in 2016 for Ant-Man and been nominated for multiple MTV Movie and TV awards as well as a Screen actors guild award.

He made an appearance for big movies like Ant-Man franchise, The Legend of Ron Burgundy, The 40-Year-Old Virgin, Knocked Up, Forgetting Sarah Marshall, I Love You, Man, Dinner for Schmucks, Our Idiot Brother, The Perks of Being a Wallflower and This is 40. He was awarded a star on the Hollywood Walk of Fame in 2015.

There was a rumor that Paul Rudd forced to deny he was one of the heroic passengers who took down the homophobic man at Dallas airport after lookalike sparks.