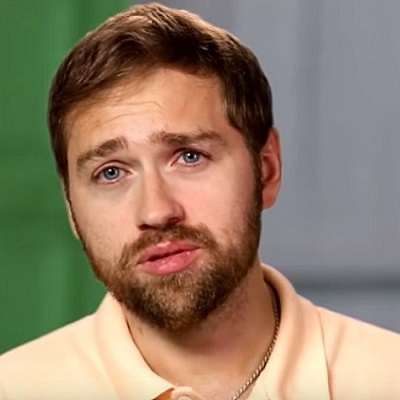 Paul Staehle is currently married to native Brazillian, Karine Martins. They got married on 3rd November 2017.

The couple first met each other online and fell in love with each other. Despite having a language barrier, the couple has already completed 3 beautiful years as a husband and wife.

Together, the couple is blessed with a son, Pierre Martins Staehle. His wife is again pregnant with their second kid.

However, every day is not Sunday, the couple has been through a rocky relationship where they have been in the verse of getting separated via divorce. As of now, they are doing fine.

Who is Paul Staehle?

American Paul Staehle is a TV Personality. He is renowned for his appearance in the TLC reality TV series, 90-Day Fiance.

Paul Staehle was born as Paul Jason Staehle on the 2nd of April 1983 in Louisville, Kentucky, United States. He is of German ethnicity.

To date, he has not shared any details about his mother, father, sister, and brother. However, he shared a picture of his mom on Instagram. Through the post, he also shared that she had been fighting breast cancer.

In 2017, he came into the limelight after making an appearance in the TV series, 90 Day Fiancé: Before the 90 Days along with his then-fiancee, Karine Martins (now wife) who is originally from Brazil.

Prior to that, he used to work as a K9 Handler and IT guy. After his appearance in the series, he featured in the TLC’s TV series documentary, 90 Day Fiancé: The Other Way along with his wife, Karine as a couple.

Recently, in 2020, the couple appeared in the TV series, 90 Day Fiancé: Happily Ever After?

Is Paul and Karine Fired from 90 Day Fiancé?

As per Screenrant, the couple might have been fired from the show. Recently, Paul revealed that his family is struck in Brazil as Karine’s Green Card got stolen.

However, TLC’s viewers had their own speculation that if Karine has lost her Green Card so that she doesn’t have to return to States. Such statements from the reality TV star has led fans to believe that the couple might not be welcomed in the show as TLC is known for their strict contract policy.

Throughout his career, he has made a net worth of $100k. His earnings as a TV Personality are in the range of $50k or above.

Through his previous job as an IT officer, his earnings were in the range of $68k or above.

Paul Staehle has blue eyes with auburn hair. He stands at a height of 5 feet 10 inches and has a decent weight with average body type.

– As per the court record, he is connected with an arson charge. Those records mentioned that in 2007, he tried to defraud the insurer by burning his personal belongings. In 2014, he was convicted of felony arson. He was given probation at sentencing which will be completed in 2020.

– In 2013, The Taylorsville police arrested him on charges of violation of the Kentucky Emergency Protective Order.

– Also, the reality TV star found himself in the middle of controversy when he accused his wife, Karine of having extramarital affairs with a fitness Instagrammer, Joe Devito. However, Joe is openly gay. Even Paul demanded the paternity test.