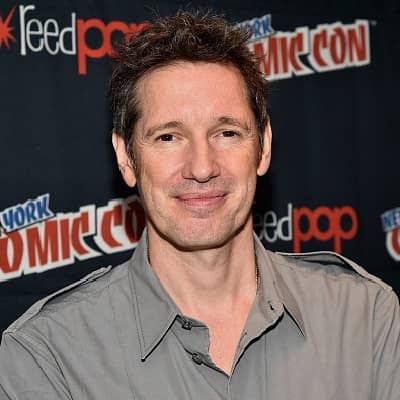 When people see what real 3D looks like, they'll go, "Oh, that's why I spend an extra $5 a cinema ticket.

My approach has always been to put 100% into the movie I'm making right now.

I'm a very collaborative person, so that's not the way I work anyway.

Paul W. S. Anderson is married to Milla Jovovich, a supermodel, and actress. The couple met each other during the filming of Resident Evil in 2002. Then they started dating.

Who is Paul W. S. Anderson?

Paul W.S. Anderson is an English screenwriter, producer, and filmmaker.  He has worked in science fiction films and video game adaptations.

He is best known for the sci-fi horror film Event Horizon, Mortal Kombat, and the Resident Evil film franchise.

Currently, he is working on the new television series, Mimic which is the adaptation of Guillermo del Toro’s 1997 creepy bug flick.

The names of his parents and siblings aren’t disclosed. Paul was interested in filmmaking from an early age. He used to play with the camera when he was just 9 years old.

He holds an American nationality and is of mixed (Greek and British) ethnicity.

He finished his B.A. in films and literature at the ‘University of Warwick’.

Paul W. S. Anderson first started his career as a writer for the British TV show ‘El C.I.D’ from 1990 to 1992. Then he works with producer Jeremy Bolt, and founded ‘Impact Pictures.’

In 1994, he released his first film, ‘Shopping,’ but the British Board of Film Classification didn’t let the movie release due to its violent scenes. Later, it was released in the direct-to-video format after certain scenes were edited out.

He released his second film, ‘Mortal Kombat,’ in 1995. The movie was the adaptation of the popular video game, ‘Midway Games.‘ It remained at the top spot of the US box office for 3 weeks. It was the first successful video-game adaptation by him.

His other video-game adaptations are ‘Super Mario’ and ‘Street Fighter,’ He released a science-fiction movie,‘Event Horizon,’  in 1997  and ‘Soldier,’ in 1998. In 2000, Anderson also wrote and directed the pilot of the supernatural drama series ‘The Sight.’

Also, he directed a romantic action-adventure film named ‘The Three Musketeers’ in 2011.  ‘Pompeii,’ is also one of his popular movies which are based on the eruption of Mount Vesuvius in 79 AD.

He along with Mark Brozel directed the first two episodes of the science fiction television series Origin. In 2016, Anderson was in the pre-production of a feature film based on Capcom’s Monster Hunter video game franchise.

Being one of the successful personality, his net worth is around $50 million.

In the year 2016, Paul with his wife, Milla purchased the property in Beverly Hills for around $3.922 million.

Likely in 2005, they had also purchased a townhouse in New York’s West Village for $6.375 million but rent it out soon after its purchase. In 2013, they sold the spacious property for $6.7 million, gaining much profit.

And in 2007, the couple purchased $8.5 million Mediterranean Villa of 8,493-square-foot in Beverly Hills.

This producer hasn’t been into any of the rumors. Similarly, he is also far away from scandals.

Paul W. S. Anderson stands tall with a height of 6 feet 3 inches and has a decent body mass.  He has dark brown colored hair and eyes.