Updated On January 29, 2023 | Published By: Thomas Gregory
Share this
In Relation 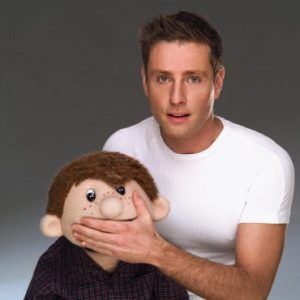 What is the relationship of Paul Zerdin?

Paul Zerdin is in a relationship. His girlfriend’s name is Robyn Mellor. After he won the 2015 AGT, he was greeted at the London Heathrow airport by his girlfriend and a celebratory balloon.

Robyn is a British actress and singer.

Who is Paul Zerdin?

Paul was born to British parents in the year 1972 in London. He is of European descent.

He spent his childhood with his parents in a friendly and entertaining environment. His parents are both drama-school graduates.

His mother worked as a presenter on Radio 2, while his father was a BBC World Service Provider.

There is no factual information regarding his educational background. He had possibly attended a boarding school. Talking about his early life, he was entertaining and was able to gain fame among his friends and family.

Only at the age of 10, did Paul Zerdin start attending Puppet Theater and appeared in different shows.  After several years, he got a book on ventriloquism and started focusing on it.

Then, he started presenting himself inside the mirror daily and practiced speaking without moving his lips in a different voice.

Once he also worked in the magic shop and was able to increase his magic talent. Afterward, he made his T.V. debut as a magician on the BBC’s Tricky Business.

He won The Big Talent Show in 1996 by more than 100,000 votes and was hugely recognized by common people.

He attended the audition for America’s Got Talent in June 2015 and performed a chatting act with his puppet.

Paul was selected by all three judges (Howard Stern, Heidi Klum, Mel B, and Howie Mandel) and sent to the next round. He gave his best in the entire round and finally won the trophy of America’s Got Talent 2015.

He won one million dollars and a headline residency show in Las Vegas along with the trophy. Through his good sense of humor and personality, he was able to gain more fame, fans, and critics.

He has made a respectable position as Ventriloquist and has an estimated net worth of $2 Million as of 2022.

After winning America’s Got Talent trophy, he immediately returned back to London, which was a little controversial.  Paul also is constantly plagued with gay rumors because he has not had any relationship or affair with any woman.

This is not factual news and should be investigated to find out the truth behind it. Paul was accused by Ronn Lucas and David Strassman of stealing their acts and presenting them as original on AGT. He was said to have fooled the Judges.

Paul Zerdin has a height of 5 feet 9 inches and weighs 60 kg.

He has dark brown hair and hazel eyes. His dress size, shoe size, and other body measurements are unknown.