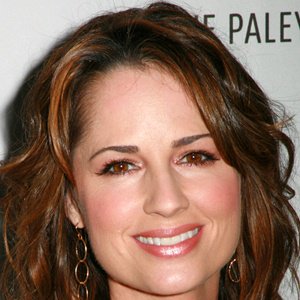 I was the captain of the pompom squad but not the cheerleading squad. There's a difference. The Peary Poms were the best in the state.

I think I was a pretty normal kid. I wasn't the prom queen, but I wasn't a freak, either.

I don't think I was ever responsible for anything being canceled.

Paula Marshall is a married woman. She has been married to Danny Nucci since October 12, 2003. The couple has welcomed a child named Maya Nucci in March 2005.

Previously, she was married to Tom Ardavany from October 14, 1989, to 1998. The reason behind their separation is still unknown.

Who is Paula Marshall?

She was born on June 12, 1964, in Rockville, Maryland, USA. She is currently 54 years old. Her father’s name is James Gerard “Jim” Marshall and her mother’s name is Betty Marshall.

She is the sister of Bob Marshall(Virginia politician) who is known for proposing a ‘bathroom bill’ before his defeat by transgender candidate Danica Roem in the November 2017 state election. Paula attributed his defeat to ‘karma’ for his ‘homophobic’ acts.

She is the sister-in-law of Yael Nucci and Natalie Nucci. Paula holds American citizenship but her ethnicity is a mix of Irish, Austrian, and Serbian.

She portrayed the guest role as Iris West in the pilot episode on the short-lived ‘Flash’. She guest starred on ‘Superboy’ and had a three-episode guest role on ‘The Wonder Years’. Also, she made her guest appearances on shows such as ‘Seinfeld’, ‘Nash Bridges’, ‘Diagnosis: Murder’, etc.

Her first sitcom role was on ‘Wild Oats’ in 1994. She appeared as Dr. Abby O’Reardon in the science fiction cult classic ‘W.E.I.R.D. World’ in 1995. After a few years, she gained a role on 1997’s ‘Chicago Sons’. She portrayed the recurring role on ‘Spin City’ in the same year.

In 1998, she appeared on Rob Thomas’ ‘Cupid’ in which she appeared as Dr. Claire Allen. She appeared in an episode of Alicia Silverstone’s ‘Miss Match’ in 2004. After three years, she appeared in the Showtime series ‘Californication’. She is also recognized for his role on the CBS sitcom ‘Gary Unmarried’.

She portrayed the role of Kathy Vick in an episode of ‘CSI: Crime Scene Investigation’ in 2012, and guest starred in two episodes of ‘Two and a Half Men’ as Alan Harper’s transgender girlfriend Paula in 2013.

Paula was nominated for Chainsaw Award in the category Best Supporting Actress for ‘Hellraiser III: Hell on Earth’ in 1992.

She might have earned a huge sum of money from her career however, she has not revealed her net worth, salary, and income.

She has been successful in keeping away herself from rumors and controversy in her professional and personal life.

‘We were going to have a kid’-Tanya Callau’s plan for family expansion shattered, her defending comments….! Read on for more on Alan Thicke’s family feud