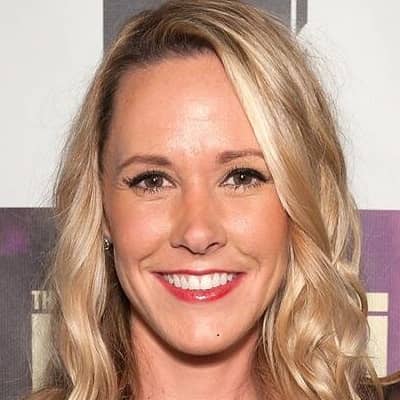 Paula Meronek is happily married to Jack Beckert. However, details regarding her husband aren’t available till now.

The couple first met in 2012 and On 7th October 2012, the pair announced their relationship via Facebook. Later, Jack got on his keen and asked Paula to be his forever.

Soon after that, the couple got engaged and married on the 5th April 2014 in an intimate affair which was attended by their family and their loved ones only.

They are blessed with three children, two daughters, and one son named Atlas Beckert, Athena Beckert, and Aurora Mae Bechert.

Paula Meronek is an American actress and reality star. She is better known for the Real World/Road Rules Challenge.

The Reality star was born on 7th July 1981, in Meriden, Connecticut, United States. As of 2021, she is 40 years old. Her birth name is Paula Walnuts. She holds an American nationality and she belongs to Caucasian ethnicity. Her Zodiac sign is Cancer.

Details about her family member including father, mother, and siblings are unknown. She graduated from Quinnipiac University.

Paula Meronek first made her appearance in 2006, when she made her debut on the MTV show, The Real World: Key West. The very first episode was aired on the 12th of October, 2006. She showed fight in her Pole Wrestle elimination loss to Anees on The Duel, but emerge on Inferno 3 as arguably the best female competitor and won the Life Shield in the Giraffic Park mission.

Whereas, she also competed on The Duel II, Fresh Meat II, Cutthroat, and Battle of the Exes. She was the finalist of three-season, The Inferno 3, The Gauntlet III, and The Island. Paula was the ultimate winner of The Challenge: Rivals and Rivals II where she earned total money of around $126,000.

Moreover, Paula appeared on the 2010 MTV special Spring Break Challenge as a color commentator. She also appeared in TV shows including The Tyra Banks show, 2008 MTV Video Music Awards, The Challenge and the TV Movie documentary, and more.

In 2006, Paula Meronek was arrested for assault for allegedly biting her then-boyfriend John Aylward.

Besides, she hasn’t surrounded by sorts of rumors and scandals that create a huge buzz in the media. Currently, she has stayed away from the media.

The reality star is 5 feet 6 inches tall approximately and her weight is unknown. Likewise, her other body measurement including waist, hip sizes are unavailable.

She has blonde hair color and her eyes color is brown.

The reality star has a Twitter account with the handle @paulawalnutsMTV where she has over 97.7k followers. She is active on Instagram with more than 87.1k followers. Her Snapchat handle is @paulabeck77.