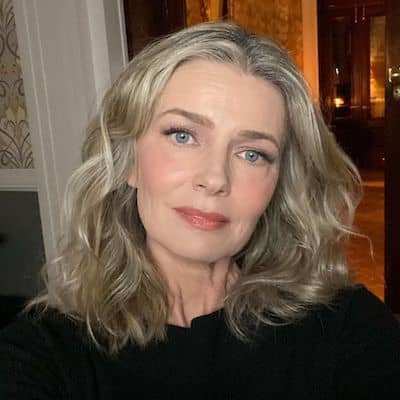 I don't believe in dieting, because even when I gain a bit of weight, it always goes to just the right places...like my breasts.

However, they separated in 2017 and filed for divorce. But in Sep 2019, Ric was found dead after surgery and the reason was not specified.

He did not put his wife’s name in his will along with their children.

Who is Paulina Porizkova?

In 1992, Paulina was one of the ten most beautiful women declared by Harper’s Bazaar. As a writer, she wrote The Adventures of Ralphie the Roach and A Model Summer.

She was born as Pavlína Elisa Pořízková on 09 April 1965 in Prostějov, Czechia. The name of her mother is and her father’s name was Anna Pořízková and Jiří Pořízek respectively.

Paulina’s ancestry is Czech and was left by her parents as they ran away to Sweden. She also has a younger brother.

Talking about her academics, she has not disclosed the particulars.

Paulina Porizkova is a successful supermodel who was associated with agencies such as The Model CoOp, Premium Models, IMG Models, Models 1, and more.

She started her modeling at the age of 13 and has appeared in the Sports Illustrated Swimsuit Issue (1984 & 1985). Her looks benefited her on the cover of New York Magazine and Vogue.

Moreover, in season 10 of America’s Next Top Model, she served as a judge. Her other TV projects are Andy Warhol’s Fifteen Minutes, Dancing with the Stars, Desperate Housewives, Nightcap, Bull, and more.

As an actress, Paulina was featured in the below-mentioned movies,

At present, her net worth is estimated at around $10 million US. However, her salary from her amazing career is not revealed.

From 1988 till 1995, she collected $42 million by signing a contract with Estée Lauder. She also sold the house bought by her and her husband at $10M.

In Feb 2021, she posed naked on her Instagram post. She received lots of negative reactions but she closed their mouths by saying sexy has no expiration date.

Recently, she was also backlashed for posing in two pieces at 55 years of age. For this, she replied that she still looks beautiful.

Regarding Paulina Porizkova’s body features, her height is 5 ft 10 inches and her body weight is 60 kg. She has blue eyes and her hair has a dark brown color.

However, she is also followed by more than 333k people on Instagram.

Widow of Ric Ocasek, Paulina Porizkova lost every penny after filing divorce and death of Ric!

Late Ric Ocasek Kept His Estranged Wife Paulina Porizkova Out Of The Will? The Couple Opt To Divorce After 30 Years Of Marriage!