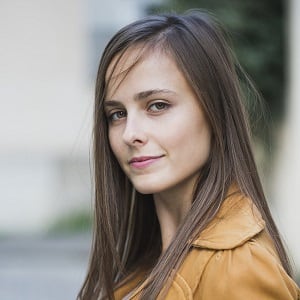 What is the relationship of Pauline Chalamet?

Pauline Chalamet has kept most of her personal life away from the media spotlight. There are no records available about her past relationships. At present, she is believed to be single.

Who is Pauline Chalamet?

Pauline Chalamet is an American actress and writer. People mostly know her for her appearance in the TV series ‘Royal Pains’ and ‘One Life to Live.’ Additionally, she is the sister of American actor Timothée Chalamet.

Chalamet was born in the United States on January 2, 1992. She is the daughter of Nicole Flender and Marc Chalamet. Her father is an editor for UNICEF and her mother is a real estate broker and former Broadway dancer. Additionally, she has a brother named Timothée Chalamet. She is of American nationality.

Furthermore, she belongs to a mixed ethnic background of French, English, Scottish, Irish, and Ashkenazi Jewish.

Talking about her education, there are no details available about Chalamet’s educational background at present.

Chalamet initially made her acting debut as a child on an episode of the soap opera ‘One Life to Live in 1999. Additionally, in 2009, she appeared as a Lead Ballerina in another TV series ‘Royal Pains. All in all, she has 7 credits as an actress.

In addition, Chalamet has also appeared in short videos like ‘En Ville, ‘Margot’, ‘Agnès et Milane’, and ‘Between Fear and Laughter.’ In addition, Pauline also has 2 credits as a director and 2 credits as a producer for ‘En Ville, ‘Agnès et Milane’, ‘Between Fear and Laughter, and ‘The Group Chat.’ Furthermore, Pauline is the niece of director and filmmaker Rodman Flender and Amy Lippman and the granddaughter of the writer, Harold Flender.

Chalamet has not been linked with any award nominations in her career.

How much is the net worth of Pauline Chalamet?

Chalamet has not revealed her current salary. Furthermore, there are no details available about her estimated net worth at present.

Chalamet has not been part of any notable controversies in her career. Furthermore, at present, there are no rumors concerning her life and career.

What are the body stats of Pauline Chalamet?

Talking about her body measurement, there are no details available about Chalamet’s height and weight. Her hair color is dark brown and her eye color is green/hazel.