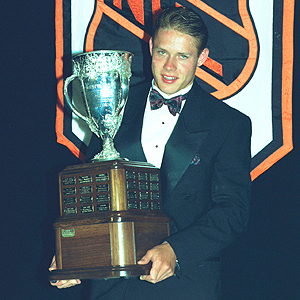 Talking about his relationship status, he was married to Jayme Bohn which didn’t last long. As a result, they decided to divorce and go on their own paths. However, there is no information regarding the date concerning their marriage, divorce, and children. Later on, he shared a relationship with tennis star, Anna Kournikova. They were reported to have been engaged in 2000 which was later denied by both of them. On October 10, 2009, he married 23-year-old model Alina Khasanova. The wedding took place in Moscow inviting over 300 guests at a restaurant. Currently, it seems that they are going very strong but, their plans on being parents is still to be known.

Who is Pavel Bure?

Athletic Pavel Bure is a retired Russian professional ice hockey player. He always played as a right winger because of his thunderous speed. Due to his speed, he is famous as “The Russian Rocket.” He was also known for his goal-scoring prowess which made him a star in both National Hockey League and international play. Internationally, as a member of Soviet Union, he won two silver medals and gold in three world junior championships.

Bure was born in Moscow to in 1971. His nationality is Russian and ethnicity is unknown.

His parents, Vladimir and Tatiana Bure, separated when he was 12 years old, and his custody was with his mother. Vladimir Bure, a Russian swimming legend, wanted Pavel to follow his footsteps but, he aspired to play hockey. Due to his limited skating abilities, he failed to impress in his first tryout with the CSKA Moscow hockey school. He showed a significant improvement in his skills after that. By age 11, he was the best forward in his league.

In July 1982, Bure was selected to practice with Wayne Gretzky and Soviet national goaltender Vladislav Tretiak which was a television special. At the age of 11, his name was in Central Red Army’s junior team. His brother is also a professional ice hockey player.

Pavel never disclosed about his field of education.

Bure began his professional career playing for the Central Red Army team. He made his debut in September 1987. He was awarded the title of Soviet National Rookie of the Year after his first full season. Bure was selected 113th overall in 1989 NHL Entry Draft by the Vancouver Canucks. His international career also took off as he played in three World Junior Championships, winning gold in 1989 followed by silver in the next two years.

In 1994, his leadership and playing abilities helped Canucks to reach the 1994 Stanley Cup final, where they couldn’t beat the New York Rangers. He was unfortunate with series of knee injuries which made him or miss a lot of games in 1996. However, it didn’t stop him from showing his magic, as he led his country to win a silver medal at the 1998 Olympics. In March 1999, he signed a blockbuster deal that sent him to the Florida Panthers.

In 2000, he topped NHL in goals, with 58, securing his team fifth position in the Eastern Conference. His career highlight came when he partnered with his brother Valeri at All-Star game. Valeri helped Pavel to win the MVP award. Unfortunately, following two seasons were not successful. In March 2002, Pavel signed to the New York Rangers. But, he had a season-ending knee injury in his first season with the club. After a brief stint in the following season, he re-injured his knees. He formally retired from playing hockey in 2005 as a member of the Rangers. He served as a General Manager of Russia’s men’s hockey team for the 2006 Olympics.

Pavel Bure: Salary and Net Worth

Due to the successful career Pavel Bure had, he amassed the net worth of $68 Million but his salary is not revealed yet.

On October 31, 2006, Bure has kicked off a British Airways flight by the pilot he was mistaken for a rowdy soccer fan. Despite an apology from the airline company in June 2007, Bure sued British Airways for 20 million rubles. In August 2007, the Tver Court of Moscow ruled in favor of Bure of 67,000 rubles. During his career, there was a rumor about him having ties to the Russian mafia which was denied by him.

Bure has a medium body stature standing 5 feet and 10 inches tall weighing 189lbs (86 kg). He has a well-built, athletic body contributing to his speed and agility. He has light brown hair color and his eyes are blue in color.