(Singer and an English Fashion and Textiles Designer) 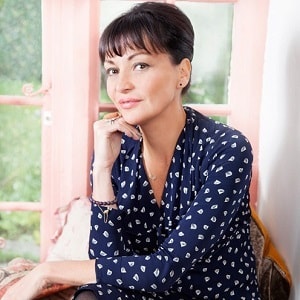 Pearl Lowe was initially involved in a relationship with singer Gavin Rossdale. They have a daughter from this relationship, Daisy Lowe who is a fashion model.

Pearl and her current husband Danny Goffey have been together for a long period of time. They were together for 13 years since 1995 until they finally tied the knot on 4 December 2008.

The wedding ceremony took place in Somerset in front of celebrity friends and family. Pearl and Danny originally planned to wed a year ago the ceremony took place but were forced to cancel it at the last minute due to his touring commitments. She has three children with Danny, Frankie, Betty, and Alfie.

Her current relationship seems to be going strong as no news regarding any extramarital affairs or about divorce can be found at the moment.

Who is Pearl Lowe?

Pearl Lowe is a former singer and an English fashion and textiles designer who was the vocalist for the indie bands Powder and Lodger.

She currently has her own line of curtains and pillows, as well as handmade dresses.

Pearl was born in Bethnal Green, England on April 7, 1970, to mother, Leila, who was an interior designer, and her father, Eddie, a bouncer.

Her family was originally from Bethnal Green and Pearl was named after her mother’s mother, who died on the day she was born.

The details regarding the educational background of Pearl is currently not available. She has not disclosed this information in any of her interviews.

Pearl Lowe’s career in the music industry began early in her career. She was the vocalist of Powder and Lodger, the mid-1990’s indie bands which she fronted after a brief period at LAMDA, and as a solo artist under the name Pearl.

She then launched ‘Pearl Lowe‘, her signature range of lace curtains and cushions in 2001, and by 2006, she had begun designing her own bespoke handmade dresses that were sold to Liberty and The Cross in London. Currently, she also designs capsule ranges for the budget chain Peacocks.

In 2007, Pearl published her memoir ‘All That Glitters’, a somber look at overcoming addiction which describes perfectly all the twists and turns in her life caused by her addiction and how she was able to overcome it. Pearl was briefly the face of Agent Provocateur and was an ambassador for the homeless charity Crisis, but is now an ambassador for Action on Addiction.

The information regarding the salary of Pearl of her current occupation as a fashion designer is not available and the details regarding her net worth are not made available to the public.

Pearl has been part of numerous controversies due to her addiction. Her addiction was the main cause of various ups and downs in her career which she has described in her memoir.

Information regarding the body measurement of Pearl Lowe is missing and has been left to guesses and speculations. She stands at a height of 5 feet 8 inches and also weighs around 58 kilograms.

She has eye color and her hair color is dark brown.