Talking about his love life, Pedri is presently single and he is not dating anyone at the moment. He might be focused on his career right now.

Moreover, Lopez seems to be private in nature and has been secretive towards his relationship or private details. 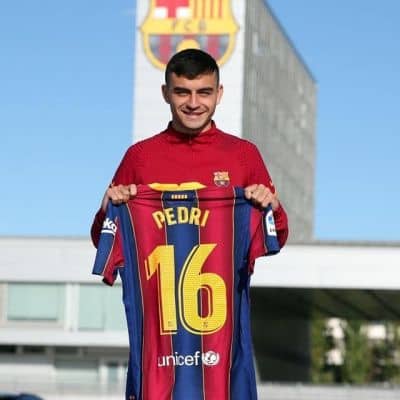 Pedro Gonzalez Lopez, popularly known as Pedri is a well-recognized footballer. Gonzalez plays for the Spanish national team and for Barcelona as a central midfielder.

Pedri was born on 25 November 2002. At present, his age is 18 years old. Likewise, his birthplace is Tegueste, Spain.

Not much known about his father and mother’s details, Pedri has been secretive towards his parent’s details. Moreover, he has a brother as well. His parents supported Barcelona before he was even born.

Talking about his nationality, Lopez holds a Spanish identity whereas his ethnicity is Hispanic.

Regarding education, the athlete has not revealed his academic background to the public. He might be pursuing his degree at the university of the town.

Professionally, Pedri started his football journey in 2018 from CF Juventud Laguna. He then signed a professional four-years contract with the club on 15 July 2019. Later, Pedri made his official debut on 18 August 2019 starting in a 0-1 home loss against Huesca in the Segunda Division.

The star midfielder made his first goal on 19 September. Additionally, he made an agreement with Barcelona on 2 September 2019. The player admitted to a five-year contract with the Catalan club for a reported fee of €5 million. He played with the Jersey number 16 for the 2020-21 season.

On 17 April, Pedri won his maiden trophy in his senior career after Barcelona beat Athletic Bilbao 4-0. The midfielder earned his first call up the Spain senior team in March 2021 ahead of the group stage of the 2022 FIFA World Cup qualification.

He then made his debut for the senior team against Greece on 25 March 2021. Pedri also became the youngest player to appear for Spain at the finals of a European championship.

A young rising Spanish midfielder, Pedri has earned a handsome amount of money from his uprising career.

It is reported that Pedri has an estimated net worth of €10 million. His market value is €70 million. his average salary is considered to be £1,768,000.

Pedri has never been part of any controversial matter or rumors till now. The athlete has been preoccupied with his professional and private life.

It seems that Lopez prefers enjoying his personal life and does not want to merge it with his professional life.

18 years old star footballer, Pedri has dashing and handsome looks. He stands at a height of 5 feet 9 inches. Also, he has a balanced bodyweight of 70 kg.

Furthermore, Lopez has brown eyes whereas his hair is dark brown.

Regarding his social media presence, Pedri is an active personality on social media. Pedri has more than 2.1 million followers on his official Instagram account @pedrigonzalez.

He is also active on Twitter with around 391k followers.

Moreover, Gonzalez is also available on Facebook with nearly 385.7k fans and supporters.