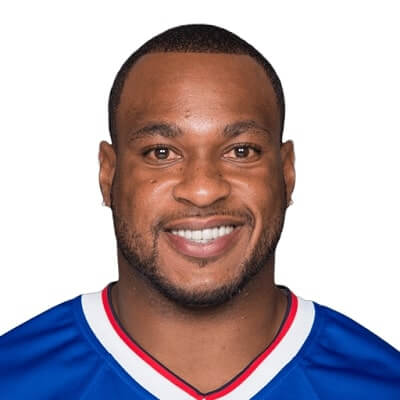 Percy Harvin is in a relationship. He is dating Janine Williams. The couple started dating when they were in Florida. From their relationship, they have a son named Jaden Harvin. They have not revealed anything about a possible marriage in the future.

He has stayed private regarding his personal life. There is no information about his previous relationships and affairs.

Who is Percy Harvin?

Percy Harvin is a former American football player. He used to play as a wide receiver for Minnesota Vikings, Seattle Seahawks, New York Jets, and Buffalo Bills. In 2013, he won the Super Bowl XLVIII with the Seahawks.

He was a gifted athlete from his childhood days. He started playing from an early age. At the tender age of 13, he played for the Virginia Beach Mustangs football team.

Talking about his education, he went to Landstown High School, Virginia Beach. After that, he joined the University of Florida.

Percy Harvin has an estimated net worth of around $18 million. During his NFL days, he earned around $2.5 million annually. His career earnings in the NFL crossed over $42.2 million.

Harvin joined the University of Florida in Gainesville after accepting an athletic scholarship. He then had an immediate impact on the team in 2006 as a freshman. He went on to become a key offensive player in their national championship triumph in 2008.

Percy played for the Gators for three seasons. In those three seasons, he had 133 catches for 1,929 yards and 13 touchdowns. Moreover, he rushed the ball 194 times for 1,852 yards with 19 touchdowns by himself. His 32 career touchdowns still remain the most by a Gators wide receiver.

Moreover, he became the first player in the history of the University of Florida to rush for 100 yards and have 100 yards receiving in the same game. He achieved the feat in 2007 against Vanderbilt.

On April 25, 2009, he was selected by the NFL team Minnesota Vikings with the 22nd overall pick in the 1st round of the 2009 NFL Draft. He finished his first regular season with 60 receptions and 8 touchdowns, 2 on kickoff returns. His amazing first season in the NFL led to him being named the Sporting News’ 2009 NFL Rookie of the Year.

In 2011, Harvin came back and led the team with 87 receptions. He scored six touchdowns and was active for all of the sixteen games. He ended the season with 62 receptions of 85 targets for 677 yards with three touchdowns.

The highlight of his Seahawks career came on the second half of Super Bowl XLVIII when he ran 87 yards for a touchdown leading the team to their first-ever Super Bowl.

On October 17, 2014, he was traded to the New York Jets for a conditional draft pick in the 2015 Draft. In his first and last season in the Jets, he had 29 receptions out of fifty-two targets for 350 yards scoring one touchdown and 110 rushing yards on twenty-two attempts.

On March 10, 2015, he was released after the team traded him for Brandon Marshall.

His debut season with the Buffalo Bills ended with 19 catches on 30 targets for 218 yards and 1 touchdown.

Harvin announced his retirement from the NFL in April 2016 by stating that he needed time to recover from injury. He returned on November 1, 2016, he signed a one-year contract with the Buffalo Bills.

However, due to migraine headaches, he retired for the second time in his career on March 14, 2017.

Harvin stands at a height of around 5 feet 11 inches. He weighs around 83 kg. His hair color is black and his eyes are dark brown in color.

Harvin tested positive for marijuana in February 2009 at the NFL Combine. This made several teams remove him from their list of potential draft rosters.

In April 2020, he has claimed that he is ready to make an NFL return. He also said that he has not filed for retirement officially. He announced his retirement in 2017 when he was a Buffalo Bills player. His injuries and also his migraine problems had forced him to retire but now the player has said that he is ready to return in the NFL. In an attempt to get back to the NFL, he has been training hard with a former Olympian. After his claims, rumors surfaced around the internet about his possible;e return in the next season of NFL.

There are rumors that San Franciso 49ers want him.

You may also like to read the Bio, Career, Net Worth, Body Measurements, Relationships, and more about Malik Yoba, Stephen Bishop, Tarvaris Jackson, and more.