Updated On January 4, 2023 | Published By: Robert Taylor
Share this
Married 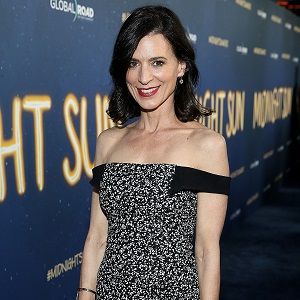 How long Perrey Reeves has been married to her boyfriend?

The 47-year-old American actress, Perrey is a married woman. She tied the knot with her boyfriend, Aaron Fox on 12 June 2015.

Since their marriage, they have maintained a perfect relationship with them and were never been involved in any affairs.

Who has she dated in the past?

Back in 1992, she started going out with David Duchovny and continued their relationship for three years till 1995.

Together, Aaron and Perrey have also welcomed a daughter named Phoenix Delphine Fox. Currently, Perrey and Aaron are enjoying their married life and living elegantly.

Who is Perrey Reeves?

Perrey Reeves is an American actress. She is famous for her role as Melissa Gold, the wife of Jeremy Piven’s Ari Gold, on the HBO series Entourage.

Furthermore, she has also starred in a couple of popular films and television series such as Escape to Witch Mountain, An Element of Truth, Child’s Play 3, Kicking and Screamin, and a few more.

Talking about her nationality, she is American and her ethnicity is mixed (English, Welsh, Scots-Irish, Dutch, and French).

She grew up in the countryside of New Hampshire along with her family. Moving towards her education, she attended Ivy League colleges in the US. Drama studies in France and Italy.

Perrey began her acting career as Laura in the 1989 television series Mothers, Daughters and Lovers.

In the next year, she appeared in a couple of TV series such as 21 Jump Street, The Flash, and The Preppie Murder. She rose to fame from her role as Melissa Gold, the wife of Jeremy Piven’s Ari Gold, on the HBO series Entourage.

Furthermore, she has also starred in a couple of popular films and television series such as Escape to Witch Mountain, An Element of Truth, Child’s Play 3, Kicking and Screamin, and a few more.

Recently, she has appeared in several hit films such as Hollow Body, Noble Savages, Dissonance, Blake, and a few more.

Moreover, she was also part of various episodes of CSI: Crime Scene Investigation, CSI: Miami, and Famous in Love.

Some of her notable roles in TV series are Grey’s Anatomy, Castle, White Collar, Private Practice, and a few more. In addition, her theater productions include “High Tor”, “House Arrest”, “Women of Manhattan”, “Picnic” and “Last Night at Ballyhoo”.

Being a famous actress, she earns a handsome amount of money from her profession. Currently, she has a net worth of $4 million as of 2022.

As of now, Perrey has not won any awards in her career. Although, she got nominations including Golden Nymph and several Screen Actors Guild Awards.

Perrey has a height of 5 feet 6 inches and her weight is unknown. Moreover, she has a pair of gorgeous brown eyes and black hair.