Politician Perry Gershon is married and a father of two.

Perry Gershon is a married man and a father of two children. Perry married Liza Suzanne who is an associate in the New York law firm Cadwalader Wickersham & Taft.

The couple tied the knot on May 20, 1995, in East Hampton, L.I. Together, the pair is blessed parents of two sons named Logan Gershon and Marshall Gershon. Currently, he is having a happy conjugal life with his wife and children and lives on the South Fork. 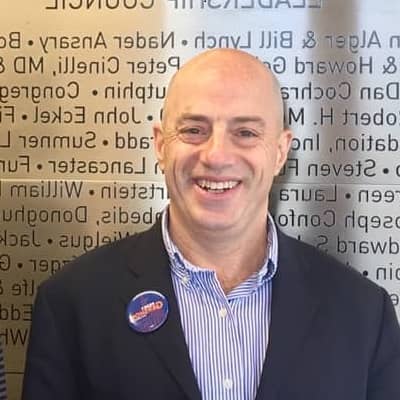 Who is Perry Gershon?

Perry Gershon is an American businessman and politician. He is the candidate of the 2018 U.S. House of Representatives from New York’s 1st district.

Perry was born in the year 1962 but his exact birth date and month are unknown at the moment. Also, he keeps a low profile when it comes to his personal life.

He is the son of Dr. Anne Gershon (Mother) and Dr. Michael Gerson (Father). His father was a professor and the chairman of the department of anatomy and cell biology.

Similarly, his mother was also a professor of pediatrics at Columbia University. Talking about his nationality, he holds American citizenship and belongs to Jewish ethnicity.

Perry completed his bachelor’s degree from Yale University in molecular biochemistry and biophysics major. Further, he studies his M.B.A. at the University of California, Berkeley.

In June 2018, Perry of East Hampton won the Democratic primary in the 1st Congressional District. Afterward, he was elected for the U.S. House of Representatives from New York’s 1st district. However, he lost the election by receiving 47.4% of votes against Lee Zeldin who has garnered 51.5% of votes.

Similarly, Nancy Goroff defeats him for the 2020 U.S. House of Representatives from New York’s 1st district and set a contest against Republican Rep. Lee Zeldin.

Besides, he is one of the successful businessmen who has already contributed more than 25 years in commercial real estate investment. At the age of 23, he founded New York’s first sports bars which he ran for 3 and half years then sold it.

Furthermore, he is also an avid marathon runner who has used his passion for sports to raise money for numerous charitable causes. To date, he has been part of more than 21 marathons.

To date, he hasn’t been part of any sorts of rumors and disputes that create a buzz in the media. Also, he stays miles away from such controversial acts that could hamper his personal and professional life.

Perry might have earned an impressive amount of fortune throughout his primary career as a businessman. However, he hasn’t yet revealed his exact net worth, salary, and yearly income in the media.

The politician has fair skin with dark brown pair of eye color. He is bladed. Further, his other body measurement including height, weight is not available.

The politician is active on Instagram under the username @perry4congress where he has more than 1 .4k followers. He has a verified Twitter account with over 8k followers.

Likely, he has also a Facebook page with more than 5.9k followers and over 5.7k likes. He has also shared his email-id [email protected] for any business inquiries.