Widely famous for appearing in several TV shows such as Shameless, Escape from Polygamy, Wizards of Waverly Place. 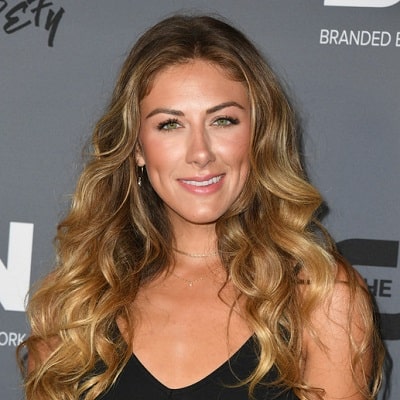 Perry Mattfeld is currently in a relationship. She is dating her boyfriend, Andrew Right who is a former baseball pitcher who played on the Cincinnati Reds baseball team.

The couple began dating in the year 2016 and cherished their quality time accompanying each other in several events and outdoor occasions. In addition, she regularly posts pics with her boyfriend Andrew in her social networking sites.

Who is Perry Mattfeld?

Perry Mattfeld is a famous American actress and dancer who is widely famous for appearing in several TV shows such as Shameless, Escape from Polygamy, Wizards of Waverly Place, and so on.

She was born on 29th March 1994 in California, the United States of America. Her birth name is Perry Frances Mattfeld and her horoscope is Aries.

She was born to Shelley Garcia (mother) and Kenneth Mattfeld (father). Her father Kenneth has been a deputy city attorney for the Port of Los Angeles since the year 2003. She is fluent in English and French.

Perry holds American citizenship but her ethnicity is unknown.

She attended Long Beach Polytechnic High School in Long Beach and graduated with a 4.6 GPA. After that, she attended the University of Southern California in California, School of Dramatic Arts with a BFA in Acting and minor in Film Studies.

She started performing and playing the piano, and also appeared in some school plays at the age of 5. In addition, she trained in different styles under the legendary choreographer Debbie Allen in Los Angeles after nine years of dancing ballet.

After that, she came as a dancer in the World Premiere Musical, Alex in Wonderland. Moreover, she appeared at Mattel’s American Girl Theater in the part of the original singing. Similarly, she depicted the role of American Girl dolls Kirsten Larson and Kit Kittredge from 2005 to 2007.

Besides, Perry spent some time in the modeling profession, but it was just a side career for her. She modeled through a connection that she had made with a fellow student, Kelly Gary who was also connected.

Perry modeled for Grayse fashion brand during that period and also became a member of the University of Southern California World Famous USC song Girls.

She debuted her acting career in the year 2006 with minor roles on a TV show, The Megan Mullally Show. After that, she appeared in several TV shows and short movies including Escape from Polygamy (2013), Stitchers (2017), Shameless (2017-2018), and many others.

Furthermore, she also played a recurring role of Murphy in the American television drama series, In the Dark.

She has an estimated net worth of around $2.5 million and she has earned that sum of money from her professional career. In 2017-2018, it was estimated that her personal net wealth was somewhere between $100k to $1 million.

She stands a height of 5 feet 10 inches tall and weighs around 55 kg. Further, Mattfeld has an attractive body structure and also has light brown colored hair while her eyes are hazel in color.