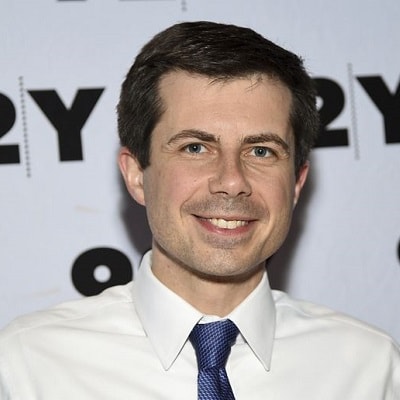 Some people my age are seduced by this libertarian idea of having very little of anything by way of a role for government. I found that in my personal experience, freedom is secured by good government just as it’s threatened by bad government.

If you're a white candidate, it is twice as important for you to be talking about racial inequality and not just describing the problem – which is fashionable in politics – but actually talking about what we're going to do about it.

I would call it Medicare for all who want it.

Pete Buttigieg is a gay person. He has been married to a junior high school teacher, Chasten Glezman since June 16, 2018.

They had been dating since August 2015 after meeting on Hinge, a dating app. In December 2017, they engaged and married in a private ceremony at the Cathedral of St. James.

He now lives with his husband and two rescue dogs, Truman, and Buddy in South Bend. In April 2019, the pair also announced that they would love to have a child.

Who is Pete Buttigieg?

Pete Buttigieg is an American politician and former Naval Intelligence Officer. He has been serving as the mayor of the city of South Bend, Indiana since 2012.

He was born on January 19, 1982, in South Bend, Indiana, USA. His birth name is Peter Paul Montgomery Buttigieg.

He was born to parents Joseph Buttigieg, professor of literature at The University of Notre Dame and Jennifer Anne Montgomery, a professor at Notre Dame. He has no siblings.

Pete holds American citizenship but his ethnicity is unknown.

He joined the St. Joseph High School, where he was a valedictorian in 2002. After that, he joined Harvard College where he majored in history and literature. There he was the president of the Harvard Institute of Politics Student Advisory Committee.

After graduation, he was awarded a Rhodes scholarship. In 2007, he received first-class honors in philosophy, politics, and economics from Pembroke College, Oxford.

While he was a student, Pete Buttigieg worked as an investigative intern at WMAQ-TV and as an intern for Jill Long Thompson’s 2002 congressional campaign. After that, he served as an advisor for the 2008 gubernatorial campaign.

In 2009, Pete Buttigieg was commissioned as a naval intelligence officer in the Navy Reserve in 2009 and deployed to Afghanistan in 2014 for a total of 7 months and returned to South Bend, where he remained a lieutenant in the Naval Reserve until 2017.

In addition, he was the Democratic Party nominee for State Treasurer of Indiana in 2010 but was defeated by Republican  Richard Mourdock.

Moreover, he was elected mayor of South Bend in November 2011 and took the office in January 2012. Likewise, it was announced in 2014 that he would seek a second term and went on to win with 78% of the vote, defeating Henry Davis, Jr.

He was elected to his second term as mayor of South Bend in November 2015 and he announced his candidacy for Chair of the Democratic National Committee in its 2017 chairmanship election in January 2017 but on the day of the election, he withdrew from the race.

Likewise, he announced his interest in candidacy for President of the United States in the 2020 election on January 23, 2019, and officially launched his presidential campaign on April 14, 2019, in South Bend.

He won first prize for the JFK Profiles in Courage Essay Contest in 2002 and had traveled to Boston to accept the award and met Caroline Kennedy.

He has an estimated net worth of around $250k and he has earned that sum of money from his professional career. Also, his salary is around $104k per year.

There was a controversy over Indiana Senate Bill 101 in 2015 and had been widely criticized for allowing discrimination against LGBT people. He came out as gay shortly afterward, making him the first openly gay municipal executive in Indiana.