Pete Carroll Seattle Seahawks head coach and Defensive Coordinator. He is a humanitarian and loves to guide people for their betterment. Pete is married to his wife since 1976 and has three children.

Pete Carroll was married to Glena Goranson on 21st May 1976. They both attended the University of Pacific. They have two sons, Brennan Carroll and Nathan Carroll and a daughter, Jaime Carroll.

Furthermore, they have a grandchild, Dillion Brenan Carroll. Before marrying Glena he was married to Wendy Pearl from 1973-1975.

Previously, he was married to Wendy Pearl on 2nd June 1973. However, the couple divorced. 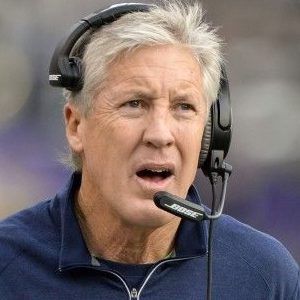 If you want to be great, do it. There’s nothing holding you back. It’s all in your control

If you create a vision for yourself, and stick with it, you can make amazing things happen in your life.

Who is Pete Carroll?

Pete Carroll is an American football coach. He is the head coach and executive vice president of the Seattle Seahawks of the National Football League (NFL). Now he is working in the NFL  as a head coach.

Pete Carroll was born on the 15th of September 1951 in San Francisco, California, USA. Currently, he is 70 years old. He is an American citizen and Irish-Croatian ancestry.

His father’s name was James Edward “Jim” Carroll and his mother is Rita (née Bann), Carroll. Mr. James taught him how to coach and play. His mother has passed away and Pete says that his mum taught him to always live like “something good is about to happen.”

He has a brother, Jim Carroll whereas he does not have any sister.

He was educated at Redwood High School in Larkspur, California, and joined the college of Marti, where he played football for two years. Furthermore, he then graduated from the University of Pacific in 1973 in business administration.

When Carroll’s got an opportunity to work on Caddis as a graduate assistant he completed his master’s degree in physical science.

Pete Carroll began his first job when Carroll tried out for the Honolulu Hawaiians of the World Football League at their training camp in Riverside he found a job selling roofing materials in the Bay Area.

He started work as a graduate assistant from 1973 to 1983 in different universities. later he worked as a defensive back coach and defensive coordinator from 1984 to 1993 at different NFL clubs like Buffalo Bills, Minnesota Vikings, New York Jets, and many others.

During his stint as defensive coordinator, he was promoted as a Head coach in New York Jets. Furthermore, he was appointed at the Head coach at New England Patriots and USC. Now he is servings as a Head Coach at Seattle Seahawks.

For awards and recognition, he has been awarded as coach of the year from  2003 to 2006 by various colleges, magazines and football associations. He was named as a member of the 2015 USC Athletic Hall of Fame class in July 2014.

He has an estimated net worth of $30 million and as a coach, his salary is $8 million per annum.

There were rumors back in 2017 that he was retiring from his coaching career but later he dismissed the retirement on his Twitter account. Besides that, he is far from controversies.

Pete Carroll is 5 feet 11 inches in height or 1.80m and weighs 79.4 kg. His hair is grey in color and his Eyes are also grey. Furthermore, there is no information about his weight and other body measurements.