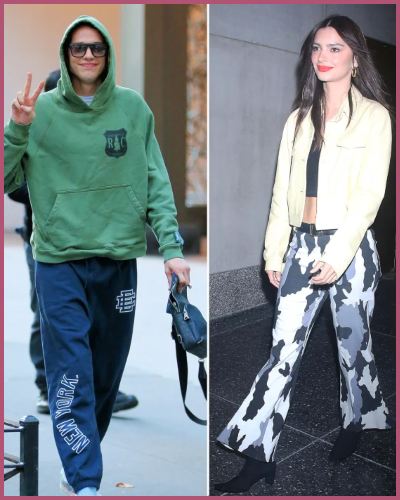 Pete Davidson has reportedly moved on after split with Kim Kardashian

Pete Davidson and model Emily Ratajkowski are presently rumored that they ‘like each other’.

The 28-years-old Comedian has recently had a publicized breakup with the SKIMS founder Kim Kardashian after nine months of a whirlwind romance. A source confirmed to US Weekly that Pete and Emily have been “talking for a couple of months now”.

Adding to that, an insider told they’re “in the very early stages, but both really like each other.” While Davidson is single at the moment, Emily, on the other hand, split from her husband Sebastian Bear-McClard in July. In September Emily officially filed for divorce after four years of marriage to her now-estranger husband.

Similarly, she was last known to be dating DJ Orazio Rispo following her split from her husband Sebastian. The two are seen passionately kissing in NYC last month.

When did Pete and Emily start to see each other?

Pete and Emily spark dating rumors after eagle-eyed fans claimed that the pair were seen ‘all over each other’. An anonymous source claimed to gossip site DeuxMoi on Instagram that they saw Emily and Pete on a date in Brooklyn on Sunday, writing:

“His [Pete] hands were allll over her [Emily] and they’re clearly clearly hooking up,”

According to a US Weekly report, the newly rumored couple met through a mutual friend who set them up. An insider told the outlet,

“Pete makes Emily laugh and he loves how intelligent she is,”

However, Pete and Emily have yet to be comment on the current circulating news.

Emily and Pete have worked together on a project last year. During an interview with “Late Night With Seth Meyers” the model gushed about Pete,

“Guys are like, ‘Wow. What’s that guy got?’ And I’m like, I mean, he seems super charming. He’s vulnerable. He’s lovely. His fingernail polish is awesome. He looks good! He’s great! Good relationship with his mother. We love it,”

Pete Davidson is an American actor and comedian. People mostly recognize him as a cast member on ‘Saturday Night Live’.

Additionally, he has also appeared in MTV shows including ‘Guy Code’, ‘Wild ‘n Out’, and Failosophy’. See more…

What is the Net Worth of Pete Davidson? Update Inside
Tags : Actor Comedian Saturday Night Live