Pete Sampras is an American former world No.1 tennis player. He is in a married relationship with Bridgette Wilson.

Talking about his relationship details, Pete Sampras is a married man. He is in a married relationship with Bridgette Wilson. Wilson is a well-recognized actress and former Miss Teen US. The couple tied the knot on 20 September 2000.

Moreover, they have two sons named Charles, born on 21 November 2002, and Ryan, born on 29 July 2005. They are living happily in Lake Sherwood, California. 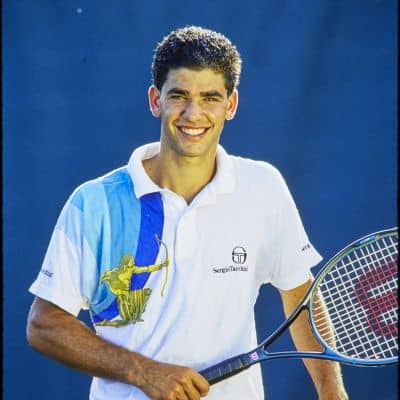 Who is Pete Sampras?

Moreover, he has won 14 major singles titles during his career which includes, seven Wimbledon titles, two Australian Opens, and a joint Open Era record of five US Open titles.

Pete is the son of his father, Sam Sampras whereas his mother is Georgia Sampras. Moreover, he has three siblings named Gus Sampras, Marion Sampras, and Stella Sampras.

Talking about his nationality, Sampras holds an American identity whereas his ethnicity is Greek-American, Polish-Jewish.

The athlete regularly attended the Greek Orthodox Church during his childhood. At the early age of 2, he found a tennis racket in the basement of his home and spent hours practicing it.

Pete is a former world No.1 tennis player. He began his professional career in 1988 and ended at the 2002 US Open. He started his career with a rank at 893 and ended the year with an admirable No. 97. The athlete won his first professional singles title at the Ebel US Pro Indoor in Philadelphia in 1990.

In 1993, Sampras reached No.1 on the world rankings for the first time without having much to show for his accomplishment. The star won the Wimbledon title consecutively in 1994-95 and was the runner-up to Agassi in the Australian Open in 1995.

In his last match, the star won against his longtime rival Andre Agassi in the final. Sampras has earned 14 major singles titles during his career, which was then recorded at the time of his retirement. It was a then-record of seven Wimbledon titles, two Australian Opens, and a joint Open Era record of five US Open titles.

Pete in advance has won 64 singles titles in total. The athlete reached the world No.1 ranking in 1993 and held that position for a total of 286 weeks. It included an Open Era record of six consecutive year-end No.1 rankings from 1993 to 1998.

A famed tennis player, Sampras has earned a massive amount of money from his profession. He lives a lavish lifestyle along with his family.

It is reported that Pete Sampras has an estimated net worth of $150million as of 2022. He has an extensive real estate portfolio and has purchased a multitude of homes in the Los Angeles area over the year. They purchased one home before attempting to sell it years later for $25 million. In 2009, Sampras and his partner bought a property in Brentwood for $5.6 million.

Freshly, they bought a second property in Bel Air, California for $3.5 million. Pete’s wife, Bridgette has a massive net worth of $25 million.

Pete has never been part of any controversial matter or rumors till now. The athlete has been preoccupied with his professional and private life.

It seems that Sampras prefers enjoying his personal life and does not want to merge it with his professional life.

50 years young star, Pete has handsome looks and an admirable personality. He stands at a height of 6feet 1inches. Also, he has a balanced body weight of 84 kg.

Furthermore, Sampras has brown eyes whereas his hair is brown. He is a former Right-handed all-courter.

His body measurement is 40-14-30 inches(chest-biceps-waist) respectively.

Regarding his social media presence, Pete Sampras is an active personality on social media. Pete has more than 40.4k followers on his official Instagram account @petesamprasofficial

He is also active on Twitter with around 16.9k followers.

Moreover, Sampras is also available on Facebook with nearly 362k fans and supporters.