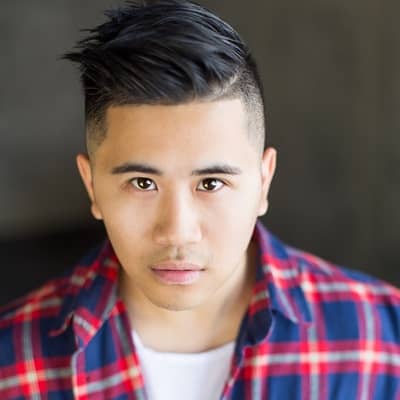 As per his old vlogs and posts on YouTube, he has a wife named Chelsea McGeachy. Once, Peter uploaded a YouTube video, planning for a surprise dinner for his wife, Chelsea on their anniversary. He revealed that they had been together for eight long years.

On September 27, 2015, he revealed the face of his beautiful wife, Chelsea McGeachy via an Instagram post. For some reason, currently, she is nowhere to be seen on his youtube and Instagram anymore. No one knows the reason as he has not talked about his love life lately. Despite having a beautiful wife, he has a YouTube girlfriend named Linda Dong.

Who is Peter Chao?

Peter Chao is a Canadian YouTuber, Vlogger, Actor, and Social Media Star. He is popular for his sense of humor, parody videos, politically incorrect content, and comedy vlogs among his fans. Peter is an accomplished Youtuber and creative content creator with over 785K subscribers.

Davin Tong, better known by his alias Peter Chao was born on 8 May 1987, in Fredericton, New Brunswick, Canada. As of 2021, he celebrated his 34th birthday.

Likewise, he hasn’t revealed any details regarding his parents and siblings. However, he was born to Chinese parents who later moved to Canada. He intends to keep his personal profile low at the moment. Peter loves his family and loves to spend time with them. Peter is a bilingual who can speak fluent English and Cantonese.

He holds Canadian nationality. His ethnicity is Asian and his real name is Davin Tong. Similarly, his birth sign is Taurus.

Regarding his education, Chao graduated from the Vancouver Film School with a scholarship in 2008. Later, he stepped out of college to pursue a full-time career as a YouTuber.

Peter Chao is mainly a Youtube content creator. Peter began posting videos to YouTube on 18 January 20o9 at age 21, under the channel “peterchao”. His channel is famous for its content of Parody videos, Comedy Vlogs, Compilation videos, Omegle content, Music videos, and Interview videos. He posted his first video about a Chinese restaurant run by Indians that garnered around 15,000 views. Inspired by it, he continued to upload more videos day by day.

As of May 2020, he already had more than 700K subscribers on his YouTube which is a great success. In a short amount of time, He became a success to add more subscribers to his youtube channel day by day. He is mostly popular for his Parody videos and Comedy Vlogs. Currently, he is already a youtube personality with over 785K loyal subscribers on his ‘peterchao’ channel. Moreover, He is also the music video producer and creator.

For Your Surprise, it seems he has more other 2 additional Youtube channels, PeterChaoTime and PeterChaoGames with over 152K subscribers and 26.8K Subscribers respectively. In these channels, he usually uploads gaming videos and Comedy Vlogs. However, he is well recognized on his main youtube channel.

His videos have gained outstanding publicity. His overall videos have succeeded to attract attention from more than 190 million people. As of 2021, he has uploaded several videos of Vlogs, Parodies, and Extras.

Apart from Youtube, he is also popular in Movie Industry. Having started his movie career in 2010 with minor roles in the short movie ‘The Plastic Protocol’, later he directed a minute-long short film ‘Paper Trail’ in 2010 followed by another short movie ‘Therapy’ in the same year. After that, there is no looking backward, and he has more than 7 film credits and commercial roles to date.

He has appeared in commercials like Campbell’s Soup, Pizza Hut, and Vote 2013 PSA. Likewise, some of the most notable films he has played include Grave Encounters 2 in 2012, Black Comedy Film The Hangover Part III in 2013, and this was followed by movies like Jackhammer and A Fairly Odd Summer.

How much is Peter Chao worth?

Speaking on his income, he makes a decent sum of money through his successful youtube career and social media presence. He has an estimated net worth of around $1M-$5M.

His earnings are influenced by his youtube channel. Likewise, he has gathered around 785K Subscribers on his Youtube.

For his politically incorrect contents, he has always stuck in many of the mini controversies in his career. His contents are loved and enjoyed by many and at the same time, some find it offensive.

Previously, his account had been suspended for fourteen days after showing a video to mock African-Americans. Likewise, Gabriella Nomura of The Vancouver Sun has stated Chao as “a breath of politically incorrect fresh air” for his offensive content. Kevin Tang of Amped Asia Magazine has branded peter as a “racist, sexist, vulgar, and self-deprecating” but also “one of the funniest Youtube celebrities”.

Peter has a decent height of 5.5 feet. He weighs approximately 63 kg or 140 lbs. similarly, his eyes are of light brown color, and his hair is also Blonde. Chao is popular for his Asian looks.

Peter is quite popular on Social media. He has around 34.7K followers on Instagram. Likewise, he also has a Twitter account with over 61.1K followers and Facebook with over 264K followers. His TikTok account has accumulated around 785.6K fan followers and 22.5M overall likes.

Similarly, it seems he has more other 2 additional Youtube channels, PeterChaoTime and PeterChaoGames with over 152K subscribers and 26.8K Subscribers respectively. However, he is most popular on his main youtube account “peterchao” with over 785K subscribers.