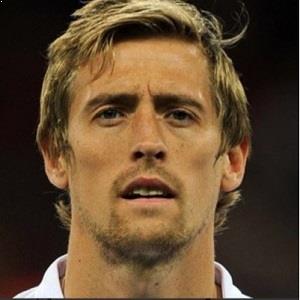 At the end of the day, it isn't about robotic dancing. It's about scoring goals and winning matches.

Peter Crouch’s relationship status is that he is married.

This couple is also blessed with a son named Johnny Crouch.

Previously, he was involved in a relationship with British Actress Lauren Pope from 2005 to 2006 approximately.

Who is Peter James Crouch?

Peter James Crouch is an English former professional footballer who played as a striker. He has appeared at two World Cups.

Crouch was born in MacClesfield, the United Kingdom on January 30, 1981, to parents Bruce and Jayne Crouch.

His family moved to Singapore when he was just a year old. The Crouch family spent three years living in the Far East and moved back to England after Bruce rejected an opportunity to work in Australia.

Peter became interested in the world of football since his early life. Crouch’s family were Chelsea supporters and he became a ball boy at Stamford Bridge at the age of ten.

As a child, he did attend some Chelsea matches and despite this, he and his friends at the time were fans of QPR.

Peter Crouch initially signed a professional contract with Tottenham Hotspur on 2 July 1998 but did not make any appearances for his first-team He had a brief spell at Dulwich Hamlet in the Isthmian League Premier Division. On 28 July 2000, Tottenham sold Crouch to First Division club Queens Park Rangers for £60,000.

Furthermore, in March 2002, Premier League club Aston Villa made a successful £5 million bid for Crouch. Then Crouch became the main attacking focus of the Southampton team after the arrival of Harry Redknapp.

Eventually, on 19 July 2005, Southampton agreed to sell Crouch for £7 million to Liverpool on a four-year contract. He returned and played for Portsmouth and Tottenham Hotspur. On 31 August 2011, Stoke City signed Crouch from Tottenham for a club-record fee of £10 million.

Crouch has a £40,000 weekly salary. Furthermore, he has an estimated net worth of around $ 35 million at present.

Crouch became part of a controversy after he was accused of cheating on Abbey with a teenage prostitute.

The woman, who calls herself Monica Mint, claimed Crouch paid her £800 for liaisons in the back of a taxi and at an £80-a-night hotel.

Furthermore, he also became part of another controversy after he used his arm to score a goal in a match against Arsenal.

Peter Crouch is a blonde and with blue eyes. His height is 6 ft 7 inches and weighs around 75 kg.

Also, read the affair, salary, the net worth, controversy, and the bio of Wanya Morris, Lauren Hashian, and Veronica Merrell.