The two tied the knot in an intimate ceremony in South Carolina in 2021. Doocy took to Instagram to announce the happy news on the 26th of April by sharing beautiful pictures from their wedding day.

His relationship however with his father especially is often noticed by the viewers of  Fox & Friends.

On Father’s day 2018, Peter wished his father, while he was reporting for Fox & Friends from the Whitehouse in July 2018. He thanked his father for doing everything for him and his sister. 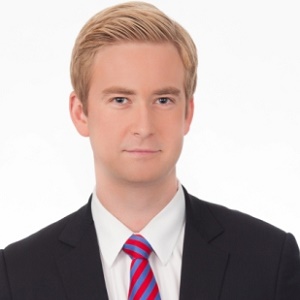 We’ve got a race on our hands, if you're a wealthy liberal sitting in New York City or Massachusetts or San Francisco right now and you could defeat one Republican in the country, it'd be me, that's why the money is flowing in here.

With the election of Donald Trump, the far left has lost their minds, the extreme left, they are energized, they’re angry and they have a lot of hatred for President Trump.

Who is Peter Doocy?

Peter Doocy is an American who is the Fox News correspondent based in Washington D.C. Peter often interviews high-profile American politicians and was one of the first journos to interview President Donald Trump in 2016 June.

He became popular since his involvement in the questionnaire asked John McCain about the drinking incident of Hillary Clinton during Chris Matthews’s Hardball College tour.

Peter Doocy was born in the year 1987 on 21st July in Washington, D.C. His parents are his father Steve Doocy, a fellow news anchor, and his mother, Kathy Gerrity Doocy of Caucasian ethnicity.

Peter has two sisters Mary Doocy and Sally Doocy. Although there are those who think Doocy’s prominence is due to his father, his fans from around the world beg to differ. Watch Peter surprise his father, Steve Doocy on father’s day.

He graduated from Villanova University with Political Science. On completion of B.A, he joined the Fox News Channel to pursue his career as a journalist.

In 2009, he started his career as a general assignment reporter for the Fox News Channel. Since then covered various important events including Hurricane Sandy Reports, Midwest 2001 flood.

He hosted the documentary ‘The Man Who Killed Usama Bin Laden’. This is to date the most rated documentary on Fox News Channel history.

He is no doubt one of the current versatile news reporters for the news channel in America. Moreover, he is renowned for reporting from the White House and Capitol Hill.

Since 2015, he has been assigned as a substitute for his father’s show ‘Fox and Friends.

As of 2022’s data, Doocy’s net worth is speculated to be around $ 8 million, and his earnings as a Fox correspondent amount to $120 k yearly.

-In 2017, when Peter asked Senator McCain, “Has your relationship with the president frayed to the point that you are not going to support anything that he comes to you and asks for?”

To this Senator got furious and lambasted Peter for asking such a “dumb question” and that as a Senator he wouldn’t let personal grudges in the way of his responsibility.

-Doocy’s casting as a reporter on the Fox News Channel in the early years of his reporting career provoked many rumors and controversies. He came to the news in July of 2016 when one of the employees of the Fox News Channel said he saw Doocy sexually harassing the female employee on the set.

Criticisms often surround him for his rude and sexist comments on set.

Peter Doocy’s eyes and hair are hazel-brown. He is 6 feet 1 inch tall. His bodyweight is 64 kg.

Also know more about the early life, career, net worth, relationships, and controversies of others including Paul Teutul Sr., Michael Teutul, and Paul Teutul Jr.