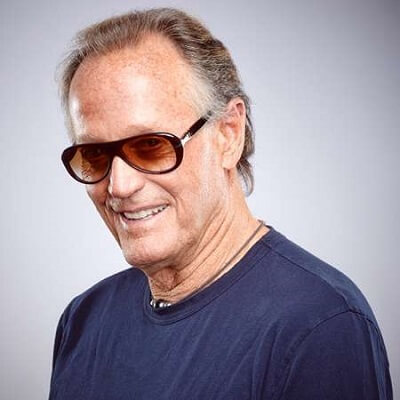 I dig my father. I wish he could open his eyes and dig me

Civilization has always been a bust

Dennis changed the way movies were made in Hollywood. I was blessed by his passion and friendship

Jack is retiring? Yeah? Far out! I never hear the news in Hawaii. All I can say is he's a good actor and thanks for telling me the news. Personally, I don't want to retire. I feel like I'm about 8 years old on most days.

What is the relationship of Peter Fonda?

Peter Fonda was married thrice during his life out of which two ended up in divorce. His first marriage was with Susan Brewer. The couple exchanged wedding vows on 8 October 1961. From their marriage, the couple had two children, Bridget Fonda and Justin Fonda. Both of them are actors. His daughter, Bridget is the most famous among his children and is well-known for her work in Godfather III. The couple divorced on 15 April 1974 after thirteen years of marriage.

Just over a year later, he married his second wife, Portia Rebecca Crockett. The couple got married on 11th November 1975. From his second marriage, he does not have any children. His second marriage lasted for around thirty-six years until they got divorced in 2011.

His third and final marriage was with Margaret DeVogelaere. The couple got married in the same year that Peter had got divorced from his second wife, Portia on 19th June 2011. The marriage lasted until his death in 2019.

Who was Peter Fonda?

Peter Fonda was an award-winning American actor, screenwriter, and director best known for his work in ‘Easy Rider’. He won two Golden Globe Awards in his career. Furthermore, he is also an Academy Award nominee.

How did Peter Fonda die?

Fonda died on August 16, 2019, at the age of 79 from respiratory failure which was caused by lung cancer. He died in his own home in Los Angeles. His sister, Jane said that ‘he went out laughing’.

Peter Fonda was born Peter Henry on February 23, 1940, in New York City. During his death, he was aged 79. He was born to parents, Henry Fonda, and his wife Frances Ford Seymour. Henry Fonda was a huge name in Hollywood back then and the birth of his son, Peter was celebrated by the entire Hollywood and was big news all over the country.

He had one sibling, his older sister, Jane Fonda. His sister, Jane is an Academy award-winning actress. Their mother, Frances committed suicide when Peter was 10 in a mental hospital. This had made him a rebellious kid and made his childhood a tough one. On his eleventh birthday, he shot himself accidentally in the abdomen and was close to dying. He referred to this incident while he was with his good friends, John Lennon and George Harrison while the three of them were talking LSD.

His ancestry was Dutch, English, Scottish, and French-Canadian.

Talking about his education, Peter joined the Fay School in Southborough, Massachusetts. Following that, he joined Westminster School, where he graduated in 1958.

After graduating, he studied acting in Omaha, Nebraska. While he attended the University of Nebraska-Omaha, he joined the Omaha Community Playhouse.

Peter Fonda made his professional stage debut in 1961 on Broadway in Blood, Sweat, and Stanley Poole. He started his feature film career in 1963 with the lead in Tammy and the Doctor. Also, he joined the cast of The Victors. Following that, he starred in Wild Angels, as the iron-fisted leader of a violent biker gang featuring Bruce Dern, and Diane Ladd. In 1967, he starred in the psychedelic movie, ‘The Trip’.

In 1969, Fonda starred, produced, and co-scripted ‘Easy Rider‘ which is the most well-recognized work of his career. The movie was about bike riders, sex, and drugs. It received huge critical acclamation and he earned an Academy Award nomination for Best Original Screenplay.

Some of his other best-recognized works include ‘Ghost Rider’, ‘Ulee’s Gold‘, ‘Wild Hogs’, ‘The Wild Angels’, ‘The Last Movie’, ‘Futureworld’, etc.

In 1988, he published an autobiography, Don’t Tell Dad (1998) which is about his troubled relationship with his father.

How much is the net worth of Peter Fonda?

Fonda was a user of drugs. He admitted to using LSD and marijuana during his time. Moreover, he smoked marijuana on-screen in the film, Easy Rider. He, along with Dennis Hopper and Jack Nicholson smoked weed on-camera. Moreover, there were also rumors about them taking LSD on camera. However, this rumor was confirmed false although they did smoke marijuana.

In June 2018, the late actor had tweeted something controversial which he later deleted and apologized for. The tweet read, “we should rip Barron Trump from his mother’s arms and put him in a cage with pedophiles and see if mother will stand up against the massive (expletive) she is married to”. However, he later deleted the tweet and admitted that he had gone too far and should not have written that.

He was once arrested for defacing a sign at the Denver airport. The sign said ‘Feed Jane Fonda to the Whales’.

Peter Fonda had a height of 6 feet 2 inches and weighed around 70 kgs. He had blue eyes and light brown hair.

You may also like to read the Bio, Career, Body Measurements, Net Worth, Relationships, and more about Jane Fonda, Dennis Hopper, Jack Nicholson, and more.