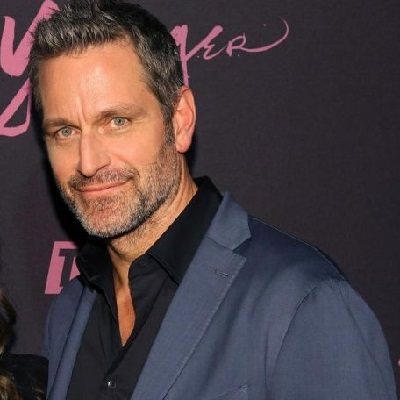 Language patterns solidify at 10, 11, 12, so I was able to learn English fairly easily, with no accent. I didn't do speech or vocal work to get rid of the German accent

I was just lucky.

Some days, I just love the physical space of the theater. I love theaters

they are heartbreakingly beautiful to me.

I still speak to my parents only in German, and I have endless family over there.

Peter Hermann is married to the actress, Mariska Hargitay. The couple first met each other at the set of series, Law & Order: Special Victims Unit where Mariska is portraying the character of captain Olivia Benson.

Later, they started dating each other in January 2002.

In April 2004, the couple got engaged to each other. Following the engagement, they exchanged vows on 28th of August 2004. On 28th of June 2006, they welcome their first child, August Miklós Friedrich.

Who is Peter Hermann?

American Peter Hermann is an actor. He is renowned as Pete Olsson of Philomena, Dr. Taylor of Just Wright, and Sanderman of Edge of Darkness.

Last, in 2019, he appeared in the TV Series, Modern Love as Philippe.

Peter Hermann was born on the 11th of May 1969 in New York City, New York. His birth name is Karl Peter Frederic Albert Hermann. He is of Ashkenazic-Germanic ethnicity.

Till the date, he has not shared any details on his family background including his father, mother, and siblings. However, his parents are German.

When he was two months old, his parents moved to Germany along with him. Later, he moved to the States from Germany at the age of 10. Returning to States, he learned the English language for the first time.

Talking about his educational background, he attended Yale University.

In 1997, Peter Hermann landed his first role in the TV industry with the series, Guiding Light. In the radio and TV soap, he portrayed the character of Dr. Michael Burke. The show happens to be the longest-running drama in American history. However, his appearance was limited to 43 episodes only.

Following the show, she featured the series, Get Real as David. Later, in 2002, he debuted in the movies through the movie, Swinfan as ER Doctor. Also, he made his appearance in the series like Hack, Law & Order, Sex and the City, and All My Children in some minor characters.

Apart from TV and movie, he happens to be the popular face of TV commercials. That includes Zantac 75, Nyquil cold medicine, Verizon DSL, and anti-tobacco advertising campaign, Fair Enough.

In 2006, he portrayed the character of Jeremy Glick in the biographical drama, United 93. The movie became one of the milestones of his career. The same year, he appeared in the movie The Treatment as Steve and series as Standoff and Angela’s Eyes.

After that, he featured movies like Just wright (2010), Our Idiot Brother (2011), Trouble with the Curve (2012) and All Is Bright (2013). Besides that, he has portrayed significant characters in the series including Younger, Law & Order: Special Victims Unit, Blue Bloods, and Modern Love.

As of 2020, he has an estimated net worth of $20 million. As an actor, his earnings are in the range of $21k to $215k. Apart from that, he also makes through his appearance in TV commercials too.

Talking about net worth, his wife, Mariska has an estimated net worth of $100 million. Her salary as a TV actress per episode is $450 Thousand.

Peter Hermann has blue eyes with brunette hair. He stands at a height of 6 feet 5 inches and has a decent weight with a slightly built body type.

Till the date, he has not been through any sorts of controversy and scandals that created headlines in the media. Besides that, he has managed to maintain a distance from any type of rumors too.