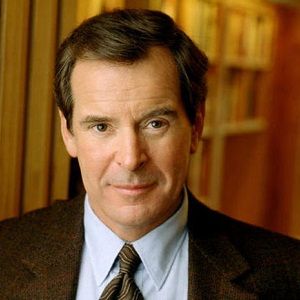 Always have a sense of humor about life - you'll need it - but always be courteous to boot.

Peter Jennings was a married man to Valerie Godsoe. But, due to some reasons they divorced. Similarly, he married Anoushka Malouf who was his longterm girlfriend. But, their married relationship did not last long and they divorced.

Again in 1979, he married Kati Marton and divorced in 1993. Their divorce was held by their mutual understanding.

Who was Peter Jennings?

Peter Jennings was a Canadian-American Journalist. He was famous for working as an anchor of ABC World News Tonight from 1983 to 2005.

The death of Peter Jennings was a shock to many people. He suffered from lung cancer and died on 7th August 2005 in Manhattan, New York, the U.S. He died with the presence of his family around him in peace. After his death, the new president, David Westin said that his colleagues and friends won’t be the same without him.

He was born on 29th July 1938 in Toronto, Ontario, Canada. Similarly, he was the son of Elizabeth(mother) and Charles Jennings(mother). His father was a prominent radio broadcaster for the Canadian Broadcasting Corporation(CBC). His sister’s name is Sarah and she was his younger sister.

Likewise, his nationality was Canadian-American but his ethnicity is unknown.

Talking about his education, he attended Trinity College School in Port Hope, Ontario when he was 11 years old. Likewise, he transferred to Lisgar Collegiate Institute. He attended Carleton University. Similarly, he attended the University of Ottawa.

He debuted in a broadcasting career when he was nine years old by hosting a Canadian radio kids show. He worked at CJOH-TV in Ottawa, Canada where he anchored a local newscast, Saturday Date on Saturday. Also, he also hosted a teen dance show and Saturdays Date. Similarly, in 1965, he was hired to host its flagship evening news program by ABC News channel. He also worked as a foreign correspondent in the year 1968. He was criticized by other news TV.

Likewise, Peter Jennings returned to World’s New Tonight as one of the three anchors in the year 1978. He was known for his marathon coverage of breaking news stories, staying on the air for 15 or more hours to broadcast the events as the Gulf in 1991.

Similarly, he had covered Millennium Celebrations in 2000 and the September 11 attacks in 2001. Moreover, he was the host of many ABC News special reports and moderated several American presidential debates. He served as the sole anchor of ABC World News Tonight from 1983 until his death.

The net worth of Peter Jennings was $50 million that he earned from his career. Similarly, his annual salary was $10 million dollars.

There was a rumor about Peter Jennings for being gay after he was chosen in 50 Most Beautiful People in the world by People magazine. But, he cleared the rumors saying he is straight. Other than this there are no rumors and controversy about him.

Talking about Peter Jennings’s body measurements, there is no information about his height and weight. He had a great body and personality as he was chosen in 50 Most Beautiful People in the world by People magazine. He had dark brown eye color and light brown hair color.