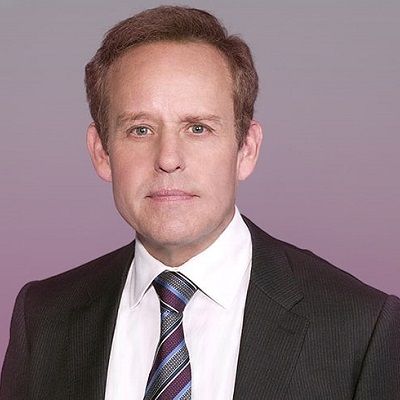 Acting is a kind of madness. A managed madness. As we strive for emotional truth in our playing, we must necessarily reach down into scarred-over wounds, and feel the old pains, over and over again

The hardest thing I do on stage is to self-induce amnesia. I want to go on every night and say, 'I've never sat in this chair. I've never been in this room

The Guthrie Theater is a beast. It has 1,300 seats, and I couldn't act there. I always felt I was acting too small. I'd always have to fight to get the gumption to act bigger. There's a weird trick to it. You don't want to overwhelm the first six rows. You don't want to starve the back. I could never get it.

Peter and Marsue met on a blind date, and the evening’s main diversion was ‘Password’. Marsue got him to say ‘pneumatic’. That was when Peter knew they are meant for each other.

Who is Peter MacNicol?

Peter is credited as audio voice-overs to his credit in ‘Nemesis’ and ‘Beach Music’. On audio, some of them are ‘Snowden’s Christmas, and ‘G.I.Joe’. As an actor in theatre, movies, and television, his roles include ‘Crimes of the Heart’, ‘Dragonslayer’, and ‘Mr. Bean’, ‘Ally McBeal’, and ‘Numb3rs’ among others.

After High School, Peter first studied at the University of Dallas, Irving, Texas, and later enrolled at the  University of Minnesota, Minneapolis-St. Paul, Minnesota, United States. Peter completed his BFA in 1976 with a major in Theatre and Living Arts.

While studying at the University of Minnesota in 1978, he performed at the Guthrie Theatre for two seasons. At Guthrie Theatre, a talent agent from New York spotted Peter and with a little encouragement, Peter moved to Manhattan during the 1980s. Incidentally, his debut in Broadway’s ‘Crimes of the Heart’ coincided with his movie debut in 1980-81, ‘Dragonslayer’.

His first debut in the off-Broadway stage play, ‘Crimes of the Heart’ became a success after the production finally moved to Broadway. There MacNicol received his first Theatre World Award. Then with the assistance of another casting agent, Peter’s success in Broadway opened up the way for him to appear for the first reading of ‘Sophie’s Choice.

In 1987, Peter worked with the cast at the Trinity Repertory Company production in ‘All The King’s Men’. Moreover, he worked in the lead role of Shakespeare’s plays like ‘Romeo and Juliet’, and ‘Richard II’, at the New York Shakespeare Festival.

Peter appeared on many TV Shows. He appeared as Martin in is an American live-action fairy-tale anthology television series ‘Faerie Tale Theatre’, in 1984, and then appeared as Sedgwick in HBO original movie ‘By Dawn’s Early Light’. He showed up as Bradley Grist in the 1992-93 American Sitcom ‘The Powers That Be’. His most recent TV Show is ‘A Series of Unfortunate Events’ in which he appears as Ishmael.

On television, Peter was a regular actor in the series ‘The Powers That Be’ as John Forsythe’s press secretary. Peter appeared in the guest roles and some of his appearances are in ‘Cheers’, ‘The Days and Nights of Molly Dodd’, ‘Necessary Roughness’, ‘Agents of S.H.I.E.L.D.’, and ‘The Big Bang Theory’, among others.

In 2015, Peter was Simon Sifter in the CBS series ‘CSI: Cyber’, and from 2016 and still going strong in 2019, is in the role of a political kingmaker in the HBO political comedy series ‘VEEP’. In 2019, Peter appeared as the guest-star Ishmael in the Netflix black-comedy drama ‘A Series of Unfortunate Events’.

The television series that really defined Peter MacNicol was ‘Numb3rs’ and ‘Ally McBeal’. His latest CBS series is, ‘CSI: Cyber’ where he stars opposite Patricia Arquette.

While working at Guthrie Theatre in 1978, Peter also worked for the movies like ‘The Pretenders’ and ‘Hamlet’ on the side, in the role of Cyrus Kinnick in the American action-thriller ‘Heat’, and as the Secretary of Defense in the science-fiction ‘Battleship’. In all, Peter has worked in more than 40 movies, more than 25 TV series, and theater. He also did several voice-over works and also featured in some video games.

A few days after his nomination for an Emmy for the HBO comedy series ‘VEEP’, Peter was ruled ineligible for the award. The reason given is that his appearance in the guest-role exceeds the limit set by the Emmy Selection Committee. Dennis Miller and Henry Winkler are among those who along with Peter MacNicol were found ineligible for the Emmy Award.

The good news for Peter is that in 2019, he was re-nominated in the same category but for the seventh season of ‘VEEP’.

Peter’s net worth is estimated at $5 M. His earnings accrue from acting, stage performance among others. His earnings as an actor are $75 k US and more.

Peter MacNicol has brown hair and brown eyes. His height is 5 Feet 7 Inch. But his weight is not known.

Peter MacNicol has 8.6k followers on his Twitter account. For his birthday, Peter MacNicol received a tweet that made his day. It said that Peter is very talented and is as ‘great as Amazo, X the Eliminator, Sidney Poindexter, Doc Ock, Man-Bat/ Kirk Langstrom, Chronos, Firefly, Professor Ivo, and Mad Hatter / Jervis Tetch’.

You may also want to read about the life and biographies, married and single status of celebrities like Judd Seymore Hirsch, Natalie Woods among others!