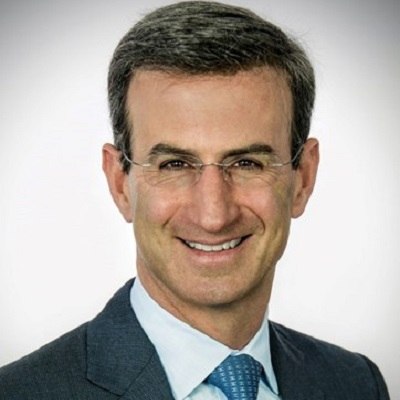 It is a foregone opportunity that we could have a trillion dollars more of income for the United States if we were producing at capacity rather than falling so far short of it.

Well, I think what we need to remember is that budget deficits can impede economic activity.

Peter R. Orszag is a married man. His wife, Bianna Golodryga is a journalist by profession. The wedding took place on the 25th of September 2010 at Capital, New York.

They welcomed their first child, Jake Spencer Orszag in 2012. Four years later, in 2016 they have their daughter, Maia Isabel Orszag.

Before that, Peter was in a relationship with Claire Milonas. With his ex-girlfriend, Claire, they have a child.

He was also married to Cameron Rachel Hamil. His ex-wife, Cameron is a special assistant at the Treasury Department in Washington. They married on the 31st of August 1997.

Together, they have two children that include a daughter, Leila, and a son, Joshua. However, they parted their way with a divorce in 2006. Later, the former couple had a nasty fight regarding child support.

Who is Peter R. Orszag?

American Peter R. Orszag is one of the celebrated economist, an investment banker, and Author. He is renowned for his budget management skills as the director of the Congressional Budget Office.

Currently, he is the CEO of the Assets management company, Lazard.

Peter R. Orszag was born as Peter Richard Orszag on the 16th of December 1968 in Boston, Massachusetts.

His father, Steven Alan Orszag was a mathematician and professor of Yale University. Also, his mother, Reba Orszag-Karp was an owner of a research and development company. Talking about his ancestor, they migrated from Hungary to States in the early 1900.

His younger brother, Jonathan Orszag was also an economist. They are of Jewish-Hungarian ethnicity.

After that, in 1992, he joined the London School of Economics and completed his post-graduation with Marshall Scholarship. From the same school, he earned a Ph.D. degree too.

In 1999, Peter R. Orszag started his career as a lecturer of macroeconomic for the University of California. However, he left the university after a year to join The Brookings Institution as Senior Fellow. In the institution, he worked as director of Hamilton and Retirement Security Project.

Moving forwards, in January 2007, he joined Congressional Budget Office as a director. During that time, he primarily worked health care aid and was highly praised for his work.

In January 2009, he became the director of the Office of Management and served the White House. As his time in OMB, he played a key role in the passage and implementation of 2009- Stimulus Legislation and 2010- Affordable Care Act.

As an Investment Banker

After that, in 2010, he joined the multinational investment bank, Citi group as the Vice-Chairman. As a Vice-Chairman, he advised various companies in multiple sectors.

Also, he served the company as the Chairman of the Financial Strategy and Solutions Group and provided the analytical support and advisories to banking teams. He served the group for 5 years. In between, he also worked Robert Wood Johnson Foundation as a board of member, The Bookings Institution as a senior fellow.

Currently, he is the CEO of the Financial Advisory at Lazard. In 2016, he joined the investment bank as the Vice Chairman of Investment Banking and Managing Director. In July 2018, he became the head of North American M&A and Global Co-head of healthcare and severed at the position for a year till June 2019.

Later, in April 2019, he was promoted to be the CEO of Financial Advisory.

Apart from being an Investment banker, he is also an opinion columnist for the Bloomberg Lp. He contributes to the topics related to macroeconomics and health care in political & behavioral economics.

Also, he is the author of books like Saving Social Security: A Balanced Approach, Aging Gracefully, and Medicare’s Payments to Physicians.

Apart from that, he also makes through royalties of his books.

Back in 2014, he won the long-lasting child support battle with his ex-wife Cameron Rachel Hamill. At the time, Cameron claimed the child support that worth $22k monthly.

However, the court ruled that he will be paying private school fees, summer camps, medical expenses, and extra activities. Whereas Cameron will be providing some meals.

Peter R. Orszag has brown eyes with black hair. His height is 6 feet 2 inches and weighs around 73 kg.