Peter Wentz is a musician and singer-songwriter. He is a bassist of a rock band, Fall Out Boy. Peter was previously married but divorced and currently dating Meagan Camper. He has three kids. 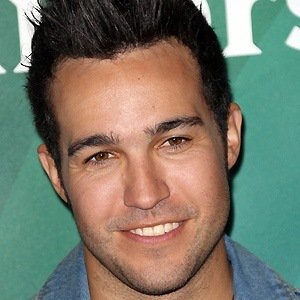 Patrick or Sonny playing on their headphones than go to some vomit-stained high school party.

Here's to the kids whose 11:11 wish was wasted on one person who will never be there for them.

Here's to the kids whose idea of a good night is sitting on the hood of a car, watching the stars.

Wentz has been in the relationship with Michelle Trachtenberg in 2006. From 2003 to 2006, Jeanne White was the girlfriend of Pete and Alicia Simmons in 2003.

Wentz began dating the singer Ashlee Simpson in the year 2006, and they got married in the year 2008, on the 17th of May, and Ashlee’s pregnancy was confirmed two weeks later.

Pete and Ashlee have a son Bronx Mowgli Wentz born on November 20, 2008. Citing irreconcilable differences Simpson filed for divorce on 8 February 2011, but the divorce was finalized only on November 22 the same year.

As of now, Pete has been dating Meagan Camper since May 2011. The couple announced the pregnancy of their child on 17 February 2014 and the child, a son Saint Laszlo was born on 21st August 2014.

Who is Peter Wentz?

Peter Wentz is an American musician. He is best known for being the bassist and primary lyricist for the American rock band Fall Out Boy. Since the announcement of Fall Out Boy’s temporary hiatus in 2009, Wentz has formed the experimental electropop/dubstep group Black cards.

Pete was born on 5 June 1979, in Wilmette, Illinois, an affluent suburb of Chicago. His nationality is American and ethnicity is mixed(Afro-Jamaican, English, and German).

He is the son of Pete Wentz II(father) and Dale Wentz(mother). Her mother was a high school admissions counselor and his father was an attorney.

He is of English and German descent on his father’s side and Afro-Jamaican on his mother’s side. He grew up with a sister, Hillary, and brother, Andrew Wentz and was interested in music since a very small age.

He graduated from the New Trier High School as well as from the North Shire Country Day School. He studied at DePaul University but dropped out soon after.

His musical career started with the Arma Angelus where he worked as a lead vocalist as well as a Lyricist. ‘The Fallout Boy ‘was created in 2001 and he served the role of lead vocalist, Lyricists as well as the bassist. He also went on to form another group, which was called the ‘Black Cards’. The group released its first album, “fall out Boy’s Evening about with Your Girlfriend in 2003. It enjoyed moderate success, but their second album,” Take this to Your Grave, “was a hit and helped the group to become famous.

In 2009 the band decided to enter a temporary hiatus after which he formed the dubstep, electropop group Black Cards. On February 4, 2013, the band announced their hiatus was over via their official web page. They released a new single off their upcoming album, a video for the single, upcoming tour dates and a pre-order campaign for the new album titled Save Rock and Roll.

In July 2010, Wentz with singer Bebe Rexha, guitarist Nate Patterson, and drummer Spencer Peterson, formed the ska/electropop band Black Cards. Originally, the band had planned to release a full-length LP in the summer of 2011. Apart from his musical career, Wentz has been involved in various entrepreneurial ventures.  In April 2007, Pete came out with his own signature Squier Precision Bass. It has a black body with a red shell pickguard and special graphics that include Wentz’s own red bat/heart design on the body, plus a black bat/diamond fingerboard inlay at the 12th fret.

On December 13, 2008, Wentz, along with Travis McCoy of Gym Class Heroes, created several pieces for an art exhibit at Gallery 1988 in Los Angeles called “Without You, I’m Just Me.” The exhibit closed on December 24, 2008. Wentz appeared in the season 5 episode of CSI: NY,” Point of No Return”, along with wife Ashlee. He also hosted the Australia MTV VMAs on March 27, 2009.

According to rumors, This versatile personality was rumored to be dating Alicia Simmons at around 2003.

Peter has a height of 5 feet 6 inches. His body weighs 67kg. He has dark brown hair. Also, he has a pair of dark brown eyes.