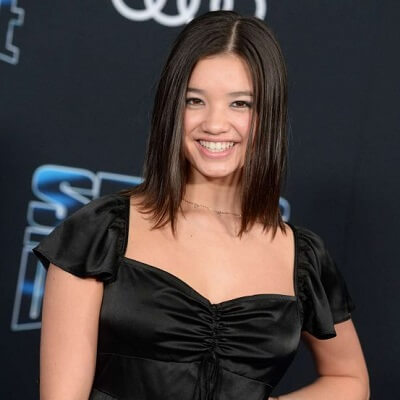 Peyton Elizabeth is currently single. She is not dating anyone and is still at a young age. She is very private about her personal life.

Who is Peyton Elizabeth?

Peyton Elizabeth is an American actress. She is famous for her works in ‘Andi Mack’, ‘Secret Society of Second Born Royals’, and ‘Scandal’.

She was born to parents Andrew Tinpo Lee (father) and Jennifer Dormer Lee (mother). Her father is an actor and guest-starred as Nicky the mailman in The Ex Factor whereas her mother is a psychologist.

She is one of her parents’ three children and has a sister named Ella and a brother named Julian. She moved with her family to Manhattan Beach, California when she was 10 years old. Her ethnicity is Chinese, American.

Talking about her educational background, she was the youngest acting student ever accepted to Playhouse West.

Moreover, she also has a great passion for dance and received formal training for several years. She has studied many forms of dance including tap, African, flamenco, contemporary, and ballet.

Peyton Elizabeth made her acting debut with the American political thriller TV series, Scandal. She appeared in an episode titled ‘I’m Just a Bill’ as “Violet”, a spelling bee champion. Following that, she guest-starred in three episodes of ‘Shameless’ as a “girl soldier”.

Elizabeth got her acting breakthrough and her best-known role as the title character in ‘Andi Mack’. The show premiered on Disney Channel on April 7, 2017.

The show is now the top-rated series on cable TV among children ages 6–14. And the first series on Disney Channel to feature a gay main character, Cyrus Goodman.

In early 2018, Lee joined the Disney Junior animated series, ‘The Lion Guard’ as Rani. She made appearances in seven to nine episodes of the third season.

In 2019, she appeared in an episode of ‘Stumptown’ as Alyssa Frank. The following year, she appeared as Sam in ‘Secret Society of Second-Born Royals’.

Peyton has also featured in commercials for Carnival Cruises, Sprint, JC Penny, and Petco. Furthermore, she has performed as a dancer in Hot Chocolate Nutcracker and The Oscars Concert.

Peyton stands at a height of 5 feet 5 inches and weighs 55kg. She has black hair and brown eyes.

As of 2020, Peyton Elizabeth has an estimated net worth of around $800k. She has not revealed her salary but on average, an American actress earns around $40k per year.

Peyton has not been involved in any controversies. She has been able to keep herself away from any type of controversy and scandal.

So far, she has not done anything controversial in her career. Similarly, there are no rumors about her of any kind. She has simply focused on her career and personal life.

You may also like to read more about the Bio, Career, Net Worth, Body Measurements, and more about Madonna, Jeremy Meeks, Ben Aaron, and more.