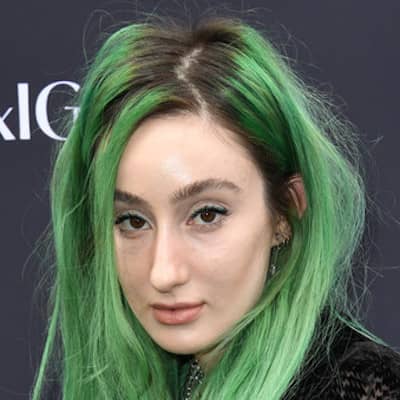 “I don’t identify with anything in particular. It doesn’t have to have a name on it. Just embrace it and make it your own because it’s the truth.'

Phem’s relationship status is taken. She is dating a guy named Tyler Posey who is an actor and singer.

They started to see each other in Feb 2021 and she helped him to realize his sexuality. Phem made him come out as queer and sexually fluid.

She said to Tyler that he is perfect and can feel comfortable under the queer umbrella. In return, he also praised his girlfriend and said he has the best relationship with her.

Phem supports The Trevor Project organization to prevent suicide that is committed by young LGBTQ+ people.

Phem is an American musical artist. She is mostly known for releasing her EP titled VACUMHEAD in 2019.

Also, she was named as one of the most prominent up-coming queer indie genre-blending artists by Billboard Magazine in the same year.

Her birthdate is 01 June 1995 and she was born in Los Angeles, California, the United States. The names of her mother and her father are under the rug.

Phem’s ancestry is Caucasian and as per her academics, the details are still hidden.

Phem as an Indie singer has given her fans several memorable tracks. Her EP VACUMHEAD that released in 2019, increased her fame.

Some of her tracks are Sorry Mama, Self Control, Shut Up, Dead Yet, Honest, Girls, Jump, Creep, I Need It, etc. Moreover, she has teamed up with other artists like Iann Dior, G-Eazy, Machine Gun Kelly, and Lil Tracy.

Her estimated net worth of around $500 thousand as of 2021. But the salary plus other incomes from her musical career are not disclosed.

This star artist is keeping herself away from rumors and desperate scandals.

Regarding Phem’s body features, her height and her body weight are average.

Moreover, her eyes and hair are dark brown. She has highlighted her hair in green color.

Phem is available on social sites such as Facebook with 5k fans. But her Twitter and Instagram accounts are followed by more than 18k and 153k followers respectively.

She also has a YouTube channel which was created in Dec 2017.

Sahar Tabar, the Instagram star is arrested by Iranian authorities for blasphemy!