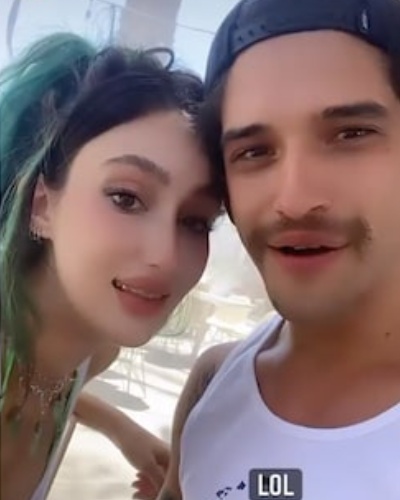 Phem is a musical artist and the girlfriend of actor Tyler Posey. Phem has released a number of albums which are how u stop hating urself (pt 1) and (1.5), Sorry Mama, and Vacumhead. Her songs are Sorry Mama, GRIM REAPER, Shut Up, dead yet, stfu, Self Control, How Bout Now, American beauty, WHO CARES, and more.

Likewise, she has been on world tours with artists like Grandson and Lil Xan. She collaborated with The Trevor Project which is an organization working for crisis intervention and suicide prevention for young LGBTQ+ individuals.

Also read Tyler Posey is definitely not pansexual! Find all about his sexuality

Relationship of Phem and Tyler Posey

Phem and Tyler Posey have been dating each other since February 2021. In an interview with NME, Tyler revealed that Phem has been supporting him and helped him explore his sexual identity. He said,

“I’ve been with everybody under the sun, and right now I’m in the best relationship that I’ve ever been in with a woman, and she’s queer too. She’s helped me realize that I fit under the queer umbrella and that I’m sexually fluid, I guess. No, not ‘I guess,’ I don’t want anyone to take this [interview] and be like: ‘Well, he was kind of wishy-washy about it.'”

“I don’t identify with anything in particular. It doesn’t have to have a name on it. Just embrace it and make it your own because it’s the truth.”

Tyler Posey is a young emerging American actor, best known for his role as Scott McCall on the MTV television series Teen Wolf (2011-present). Besides acting, he is also a musician and producer. Read more bio…

Does Erika Jayne have to pay $25 million back which she spent on luxury items?
Tags : Self Control Singer