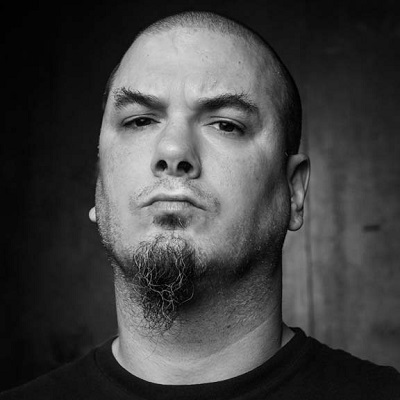 ''She did. And she will get tons of credit in my book. We've been together 11 years now. Without her strength, it wouldn't have gone the way it did. Her steadiness, her rock-solid belief in me helped me pull through and do things correctly.''

"I, Philip H. Anselmo [...] injected a lethal dose of heroin into my arm, and died for four to five minutes"

Phil Anselmo married his long- term girlfriend Stephanie Opal Weinstein on October 1, 2001, in Louisiana. She was also a musician by profession. Together they formed an all-acoustic duo called Southern Isolation. But they got divorced in 2004.

The forty-nine years old musician Phil Anselmo is in a relationship with Kate Richardson. She helps Anselmo in his record label, Housecore records.

Who is Phil Anselmo?

Phil Anselmo is an American metal singer. He is best known as the lead singer of bands Pantera, Down and Superjoint Ritual.

He is also the owner of Housecore Records.

Phil Anselmo was born on June 30, 1968, in New Orleans, US. He has Danish, Italian and French ancestry. His father owned a restaurant in Metairie called Anselmo’s, which shelved due to financial troubles.

At age 14, Anselmo accidentally started a fire in his parents’ house while pulling a prank on his sister. The incident resulted in smoke damage to most of the furniture and part of the house needing renovation.

While a teenager, Anselmo joined the band Samhain. From the early to mid-1980s, Anselmo was a member of the band Razor White.

In 2004, Anselmo left the band due to communication problems with other members.

Anselmo has been a member of Down since 2006.

The American heavy metal band was formed in 1991 in New Orleans, Louisiana. The band consists of members and former members of Pantera, Corrosion of Conformity, Crowbar, and Eyehategod.

The band was formed by Anselmo, Joe Fazzio, and Jimmy Bower in the early 1990sa and later was joined by Hank Williams and Kevin Bond. They have released three full-length albums on Sanctuary Records, Use Once and Destroy in 2002, A Lethal Dose of American Hatred in 2003, and Caught Up in the Gears of Application in 2016.

In 1998, Anselmo provided backing vocal on track 8 (“Killing Box”) from the album Volume 8: The Threat is Real by Anthrax and sang a duet (“By the River”) on Vision of Disoeder’s Imprint album the same year.

On March 6, 2006, Anselmo made an appearance at VH1’s Decades Rock Live concert, in honor of the band Heart.

He provided vocals for  “HFFK” on Biohazard’s Uncivilization album in 2001 and, Mahakali album by Jarboe in 2008.

In 2015, he made a guest appearance in the song “Prophets of Loss”.

In 2016, he sang Ace of Spades as lead vocal along with other famous musicians.

How did Phil Anselmo get into drugs?

As per his statements, he had a back injury in the mid-1990s due to which he suffered from excessive pain. To avoid the pain, he drank heavily, abused pills such as painkillers and muscle relaxants, and eventually became addicted to drugs.

On July 13, 1996, Anselmo suffered from cardiac arrest due to a heroin overdose after a show at the Coca-Cola Starplex in Dallas, Texas.

In 2005, Anselmo stopped using hard drugs and has remained clear ever since.

On January 22, 2016, Anselmo ended the “Dimebash” Dimebag Darrell tribute show by giving a Nazi salute and screaming the words “White Power” to the crowd. The incident was captured by an audience on a cell phone and the video was posted on YouTube. Anselmo later claimed he was joking about drinking “White wine”. He also apologized through the YouTube video.

Anselmo’s net worth is estimated to be $8 million.