Updated On November 15, 2022 | Published By: Clarence Bunn
Share this
Divorce 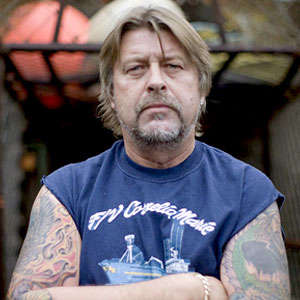 What is the relationship of Phil Harris?

Phil Harris was divorced at the time of his death. He divorced twice in his life. His first marriage was to Marry Harris in 1982. They divorced after 9 long years of marriage in 1991.

From this marriage, he was blessed with two sons, Jake Harris and Josh Harris. Both of his sons followed in his father’s footsteps.

However, he again exchanged vows with Teresa Harris. They married on Jan 22, 1992, and were separated in 2006.

Who is Phil Harris?

Phil Harris was an American boat captain and fisherman. He gained a lot of popularity and recognition during his time, on the reality, show Deadliest Catch on Discovery Channel.

He was born on December 19, 1956, in Bothell, Washington, the United States as Phillip Charles Harris. He has a Caucasian ethnicity.

his parents were Grant Harris (father) and Phyllis Harris (mother).

He developed a keen interest in fishing influenced by his father. As a result, he spent his early life fishing from the age of 8.

Talking about his education, he only completed up to high school so that he can give time to fishing.

Unfortunately, he passed away on Feb 9, 2010, suffering a pulmonary embolism.

It happened when he was offloading crabs from the vessel. Later on, an episode, Captain’s death, was filmed entirely dedicated to him on July 20, 2010.

Phil Harris started his career as-is a deckhand of the fishing vessel called Cornelia Marie. His exceptional command in his job led him to become the youngest captain of the Bering Sea at the age of 21. He served as a captain for 32 years until his death.

Later on, he appeared in the reality show Deadliest Catch airing on Discovery Channel. The show revealed his honest, frank, humorful, and kind nature. He was also the co-owner of the vessel he worked for, Cornelia Marie.

As of 2022, his beloved fisherman’s net worth was around $2 Million.

He also founded a coffee company named the Captain’s Reserve.

During his entire career, he kept away anything that could hamper his work.

Moreover, he maintained astounding professionalism in his work. Also, he was loyal to his work until the very end of his life and remained in the hearts of many.

Phil Harris had a height of 6 feet tall and their weight was average.

His hair color was brown and his eyes were hazel blue color.