(You tuber, Vlogger, and Radio personality) 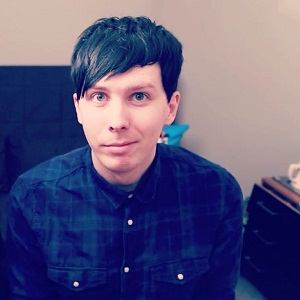 I've been embarrassing myself since about birth.

Phil is currently single nowadays. Talking about the past relationship of Phil, he was dating a beautiful girl but her name is not yet known.

He uploaded a picture with her on his social media handle, Twitter, and Instagram in the year 2013. But nothing about their relationship was revealed.

Who is Phil Lester?

Phil Lester is also known as Philip Michael. He is a British You tuber, Vlogger, and Radio personality. His YouTube channel Amazing Phil has over 4.2 million followers along with Dan Howell. Has also hosted Sunday Night Entertainment show on BBC Radio.

Phil Lester was born on 30 January 1987 in Rawtenstall, Lancashire. His nationality is British.

There is no information on his parents. He has an older brother, Martyn.

Phil Lester has been living with his best friend and fellow You Tuber Dan Howell since August 2011, and the pair moved to London together in July 2012. They frequently appear in each other’s videos.

He attended “Bacup and Rawtenstall Grammar School” and later completed a degree in English Language and Linguistics from the “University of York.” Later, he postgraduated in the Department of Theatre, Film, and Television and got a Master of Arts in video post-production with specialization in visual effects.

At the age of 19 on 27 March 2006, Lester posted his first YouTube Vlog titled “Phil’s Video Blog” on his main YouTube channel, Amazing Phil. Then he has posted over 200 videos on his channel and in December 2015 have over 3 million subscribers and 281 million video views.

In 2010, Lester and Howell took part in live, annual 24-hour internet broadcast “Stick aid”, a fundraiser for charity UNICEF. In 2011, Lester and Howell created a collaborative YouTube channel through network My Damn Channel has titled “The Super Amazing Project”, if featured the duo discussing and investigating paranormal events.

In November 2012, the BBC announced that from January 2013 onwards, Lester and Howell would present the Sunday night entertainment and request show for national UK radio station BBC Radio 1. They had occasionally worked with Radio 1 before making the videos for the station’s YouTube channel and presenting two Christmas broadcasts.

On March 2015, Lester and Howell announced via trailer on Howell’s channel that they had co-written a book titled, The Amazing Book Is Not on Fire. It was released in the UK on 8 October 2015 and worldwide on 15 October 2015, published by Ebury Press and Random House Children’s Books.

On 24 June 2016, they released The Amazing Tour Is Not on Fire later in the year as a YouTube originals film along with a making-of documentary. They were the first British YouTube creators to release content on the YouTube Red Platform.

Phil Lester: Salary and Net Worth

Phil Lester net worth is above $1 million but his salary is not revealed yet.

According to rumors, there are no any rumors about the relationship and his professional life as well.

Phil has the height of 6 feet 2 inches. His body weighs 77kg. He has dark brown hair and blue eyes.

Also get to know more about the birth facts, education, career, net worth, rumors, height, social media of different personalities like Dianne Buswell and Julien Solomita.