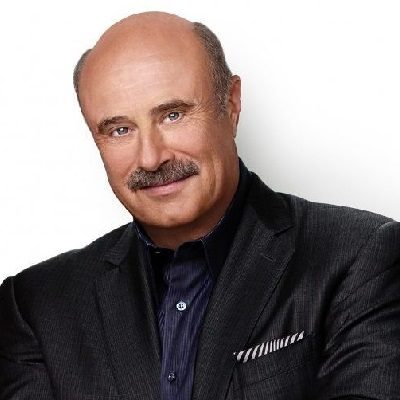 Phil McGraw is married to Robin Jameson. His wife is an author and entrepreneur by profession

The couple started dating back in 1973. After dating for three years, they got married on the 14th of August 1976.

Together, the couple has two sons; Jay McGraw and Jordan McGraw. Jay is a TV producer and writer by profession. Whereas Jordan is a singer.

Before this, Phil was married to Debbie Higgins McCall on the 27th of November 1970. Later, the couple got separated from each other via divorce in 1973.

Who is Phil McGraw?

American Phil McGraw is a Broadcasting & Cable Hall of Fame inducted TV personality, producer, and writer. Phil McGraw is renowned as the host of the TV show, Dr. Phil.

Last, in 2020, he appeared in the international game show, Who Wants to Be a Millionaire?

Phil McGraw was born on the 1st of September 1950 in Vinita, Oklahoma to Joseph J. McGraw Jr and Anne Geraldine. He is of Northern Irish ethnicity. His father, Joseph was an equipment supplier by profession.

She has three siblings. That includes two elder sisters; Deana and Donna and younger sister, Brenda.

Talking about the educational background, he received a Ph.D. degree in clinical psychology from the University of North Texas. From that university, he completed his post-graduation with Honors in experimental psychology in 1976.

Prior to that, he completed his bachelor’s degree from Midwestern State University in 1975. Before that, he attended the University of Tulsa in a football scholarship.

At the time, he used to play as a middle linebacker under the football player, Glenn Dobbs Jr. He completed his High School education from the Shawnee Mission North High School in Overland Park.

After graduating from University, he started his career with the private psychology firm in the Wichita Falls. Moving forward, in 1985, he partnered with the businessman, Thelma Box to present Pathways. Later, in October 1991, he sold his share of his company for $325 thousand.

In 1990, he co-founded the courtroom services, CSI. The firm is a trial consulting firm for providing US litigation Psychology. Moving forward, he was associated with the legal drama show, Bull as a trial consultant.

In 1995, he took his first step to his TV career At the time, the American actress-producer, Oprah Winfrey hired him for preparing the Amarillo Texas Beef Trials.

Later, in September 2002, he formed the Peteski Production and launched his own talk-show, Dr. Phil. The show provides advice to his guests on various topics. The show became an instant hit. On the 21st of May 2007, the show was ranked as the 4th position by Nielsen Media Research with around 6.69 million viewers.

In 2008, he launched his TV chat show, The Doctors as the spin-off show of Dr. Phil. Also, he was associated with the program as a producer. Apart from all that, in 1999, he published the best-selling book, Life Strategies. Within the six years, he published the books including Life Code, Relationship Rescue, and The 20/20 Diet.

As of 2020, he has an estimated net worth of $460 million. He happens to be one of the highest-paid American TV Personality. His yearly income is in the range of $80 million per year through various sorts of endeavors.

Back in 2011, he and his wife brought a mansion in Beverly Hills worth $29.5 million. The Mediterranean-style mansion lies in the land of 3 acres with the main house 14,000 square-foot. The vill has 5 bedrooms with 11 bathrooms.

Phil McGraw has blue eyes with light hair. He stands at a height of 6 feet 3 inches and weighs around 95 kg.

Back in 1989, his license to practice psychology was canceled due to various controversies putting his license at risk. That includes an inappropriate non-physical relationship with a patient. Later, in 2008, a formal complaint was placed when he was found practicing without professional license and certifications.

Recently, he has been through a huge controversy. On Fox News, he said that quarantines can have psychological effects on Fox News. Also, he has cited the numbers of swimming pool deaths as 360,000 whereas the correct number happens to be 36,000.

Robin McGraw, Wife Of Dr.Phil Talked About The Plastic Surgery Rumors; She Had A Eyebrow Transplant!!