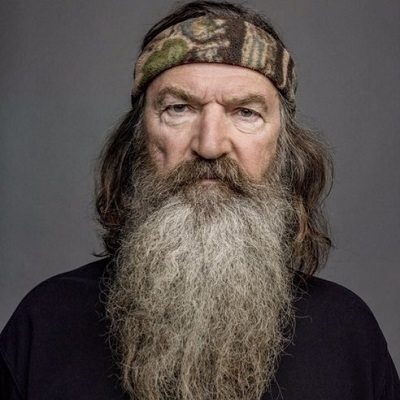 Throwing a touchdown pass was a certain amount of fun, but not nearly as satisfying as sitting in the woods with my family, coaxing the wild mallard to come in so we can have some supper. There's one race on this planet. It's called the human race. We're all the same. To me, there is absolutely nothing that has color to do with it

You have to discipline your children, or they won't respect you, law enforcement or God or anyone else.

Phil Robertson is a married man. He married his longterm girlfriend, Kay Robertson in 1966. His wife, Kay also appeared in Duck Dynasty with Phil. The couple happens to be High School sweethearts who met in High School.

On the 5th of January 1965, they welcome their first son, Alan Robertson. After that, on the 16th of August 1969, they had their second, Jase Robertson. Later, they have their third son, Willie, and fourth son, Jules Jeptha.

Also, the couple has 13 grandchildren including 5 from Willie, 3 from Jase, and 5 from Jules Jeptha.

Who is Phil Robertson?

American Phil Robertson is a reality TV star and businessman. He is renowned as a hunter of the series, Duck Dynasty.

He is also a podcaster for Blaze Podcast Network and the founder of Duck Commander.

Phil Robertson was born on the 24th of April 1946 in Vivian, Louisiana, U.S. His birth name id Phil Alexander Robertson.

His father, James Robertson, and mother, Merritt Robertson- Hale is of British-Scottish ethnicity.

He has six siblings including four brothers, Si, James, Harold, and Thomas, and two sisters, Jan and Judith.

He grew up in a family with low financial condition. As a child, he raised in a rugged family condition with no electricity and toilet. Also, his family lived on the fruits and vegetables grown in their garden and animals they raised.

Since High School days, he used to be an athletic person. After graduating from High School, he attended Louisiana Tech University with a football scholarship. From the University, he earned a bachelor’s degree with Honors in Physical education.

Moving forward, he earned his master’s degree with Honors in Education.

Phil Robertson started his career via the teaching profession. Later, in 1972, he founded the duck call brand, Duck Commander. Moving forward, in 1973, he received the patents of his Duck Commander call.

Also, in 2012, he turned out to be TV Personality when he made his appearance in the reality TV series, Duck Commander.

After that, he appeared in Duck Dynasty as Willie’s Father. Altogether, he appeared in 119 episodes. Besides that, he featured in other TV series like In the Woods with Phil, LevinTV, and The Wendy Williams Show.

In 2010, he published his first book, From the Tiger to the Crocodile. Later, he wrote the books like Happy, Happy, Happy, unPHILtered, and The Theft of America’s Soul.

As of now, he is continuing his career as a Religion & Spirituality podcaster. Currently, he podcaster for the podcast, Unashamed with Phil Robertson in the Blaze Podcast Network.

Through his career, he has made a net worth of $15 million. The major source of his earnings is his business brand, Duck Commander. Back in 2012, the company has an estimated revenue of $40 million.

Besides that, his earnings as a podcaster are in the range of $39k to $57k. Apart from that, he also makes through his TV appearance as a hunter too.

Back in 2013, he was involved in the huge controversy when he made controversial racial and anti-gay comments during his interview with GQ magazine with Drew Magary.

In the interview, he called homosexuality a sin. Also, he said black was happy in pre-civil-rights-era Louisiana. After that, Phil was suspended from the Duck Dynasty.

Phil Robertson has hazel eyes with light brown hair. His height is 6 feet 2 inches and weighs around 75 kg.

Talking about the appearance, he prefers to have long hair with a long beard. Also, he likes to wear a hairband too.

He also has a self-titled YouTube channel with over 586k subscribers.