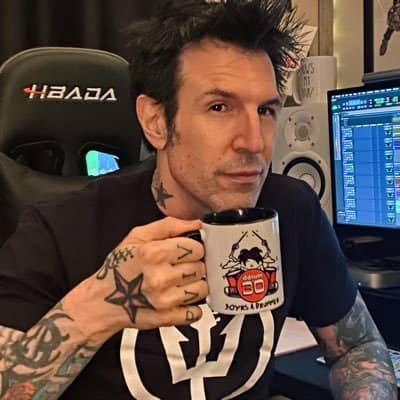 Moving towards his relationship, he was previously married to his girlfriend turned wife Kathy Varone. However, the duo divorced after some time.

Talking of his child, the drummer had his first daughter when he was 25 years old and he also has a son from his mysterious girlfriend. Varone has a marked tattoo of his son’s name on his body while appearing in the Miami Ink episode.

In the past, he had dated Achsha Lamb and actress, Trisha Paytas.

Who is Phil Varone?

Phil Varone is an American Drummer, Music Producer, and Songwriter. Phil Varone is the founding member and associated with the Florida-based glam metal band Saigon Kick.

He played for Prunella Scales, Skid Row, and Vince Neil while he was not active on Saigon Kick.

His father’s name is also Phil Varone and his mother is Angela Varone. Phil’s parents are of Italian Descent. At the age of 13, he moved to Fort Lauderdale, Florida along with his family. He grew up with his sister, Deana Varone. Unfortunately, his mother died from a cerebral aneurysm in 1998.

He received his first drum kit as a Christmas gift when he was very young. He began playing percussion instruments at the age of 7 and began to hone his drumming skills by listening to his favorite bands and drummers.

Varone is of American Nationality and came of Italian descent. His birth sign is Libra. Speaking of his education, he attended Coral Springs High School.

Phil started playing Drums at the age of 7 and played in various local bands in Fort Lauderdale.

Later, in 1990 they signed a recording contract with Atlantic Records and earned a Gold Record for the album, The Lizard.

After six-year, Saigon Kick disbanded and he played for recording artists Skid Row. Likewise, In 2003, he played drums for Vince Neil of Mötley Crüe on his solo tour. After that, Phil joined the band Red Dragon Cartel for the recording of their sophomore album Patina which was released in the year 2018.

Phil is the winner of the 2014 AVN Award after being nominated several times. He has also won the nominations for XBIZ Awards.

Of all his illustrious career, he has an estimated net worth of $5 million.

During the VH1’s “Sex Rehab With Dr. Drew,” Phil claimed that he had slept with more than 3,000 women. At the same time, he alleges that his former Skid Row partners have embarked on a crusade to spread vicious lies about Varone in an effort to destroy his professional and personal reputation. Additionally, he speaks of Sabo and Southworth having falsely informed people that he had slept with Sabo’s wife and he is a cocaine addict and a liar. This incident raised a huge confusion among the fans and audience.

He has a decent height and has beautiful brown eyes. He has mostly seen with long black colored hair but now she has short black color hair.

Moreover, he was popular for his punk looks. Furthermore, we have no information on the weight, and other body measurements of this 54 year lead songwriter and drummer.