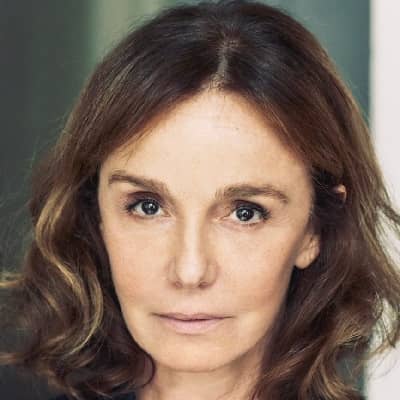 Philippine Leroy Beaulieu hasn’t yet married but she is the mother of a daughter. She has a daughter named Tais Bean who is an artist.

Tais father’s name is Richard Bean is a French documentary and filmmaker. Although the pair never married.

Previously, she has been in a relationship with Santiago Amigorena, a fellow student at her high school. As of now, Santiago is a director, screenwriter, and author.

Leroy was 17 years old when she fell in love with Santiago. After their separation, Santiago also wrote a memoir about their love affair and the trauma of their breakup.

Furthermore, she has been in a relationship with Pierre Malet (1984) and Christian Vadim (1983).

Who is Philippine Leroy Beaulieu?

Philippine Leroy-Beaulieu is a renowned French actress. She rose to fame for her prominent role as Sylvie in the Netflix series Emily in Paris.

Also, she is popular for being the daughter of actor Philippe Leroy-Beaulieu.

The actress was born on April 25, 1963, in Rome Italy. She holds French citizenship unfortunately her ethnicity is Caucasian.

She is the daughter of well-known actor Philippe Leroy-Beaulieu whereas her mother’s details are unknown. In earlier, her parents were separated, and later her father remarried Silvia Tortora who worked as a designer for Dior in 1990.

Philippine has a brother named Michelle Leroy. She spends most of her childhood in Italy.

At the age of 16, she moved to Paris to study drama. However, she hasn’t yet disclosed her academic institution name.

The actress made her screen debut in 1983 from Roger Vadim’s film Suprise Partyin which she played the role of Anne Lambert. In 1984, she features in a TV miniseries, Mistral’s Daughter playing the role of Fauve Mistral.

She made her screen breakout in 1985 playing her first major screen role in the comedy film, Three Men and a Cradle portraying the role of Sylvia.

In 1988, the actress appeared in Natalia as Natalia Gronska, the film was screened in the Uncertain Regard section at the 1988 Cannes Film Festival.

Similarly, her other credit films and television series are Neuf mois (as Mathilde), Graziella (As Graziella’s friend), Les Deux Fragonard, and so on.

Currently, she is appearing in a television series, Call My Agent portraying the role of Catherine Barneville. The series premiered on 14th October 2015 aired on France 2.

Also, the actress is the main cast of the comedy-drama television series, Emily in Paris in the role of Sylvie Grateau. The series created by Darren Star, which premiered on Netflix on October 2, 2020.

Philippine keeps herself away from any sorts of disputes and rumors. To date, she doesn’t seem in such a controversial act.

As per online sources, she has an estimated net worth of around $1 million throughout her career as an actress.

On the other side, she hasn’t yet revealed her exact salary, real estate, and other income.

The actress is 5 feet 5 inches tall and weighs is 52 kg. She got black pair of eyes with brown hair color.