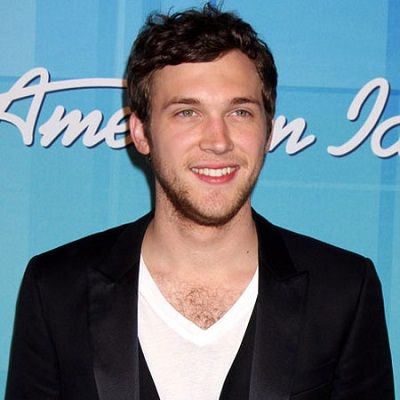 I get scared to death every time I have to play. I always get nervous because you never know what to expect. The crowd could be awful or it could be amazing. You just never know what you're going to get until you get out there and do it. I just do my best and have fun. I'm nervous, but once I get a guitar on and start a song, after the first few seconds, I can feel it ease. I don't have to worry about anything other than the music.

Phillip Phillips got married to his long-term girlfriend Hannah Blackwell on October 24, 2015. The wedding took place at the Resora Plantation in Albany, Georgia.

In Nov 2019, this couple was blessed with a boy named Patch Shepherd Phillips. The news of expecting a baby was given in July 2019.

Eventually, the couple is living a happy life together with no marital affairs.

Who is Phillip Phillips?

Phillip Phillips is a throaty style American singer who won the eleventh edition of the American singing talent show ‘American Idol’ in 2012. He holds the record for the all-time best selling song from ‘American Idol’ after his coronation song titled ‘Home’ broke all the previous records.

Talking about Phillip’s education history, he went to Lee County High School and later enrolled at the Albany Technical College.

He graduated from there with a major in Industrial Systems Technology in 2012 but he could not attend his convocation ceremony, as he was busy with his involvement in ‘American Idol.’

Phillips suffered severe pain in his abdomen after the Top 13 performance and was taken to the hospital. He was diagnosed with kidney stones. He thought of quitting the show due to his medical problems but persisted nonetheless despite the pain.

Talking about his profession, Phillip Phillips went on the ‘American Idol LIVE Tour’ from July to September 2012 and later delivered the national anthem at the opening game of the 2012 World Series. Additionally, he appeared on several live shows and primetime television shows like ‘Late Show with David Letterman’, ‘Jimmy Kimmel Live!’, as well as ‘The Tonight Show with Jay Leno’, ‘The Ellen DeGeneres Show’.

On November 19, 2012, Phillips released his debut studio album ‘The World from the Side of the Moon,’ under the production of Gregg Wattenberg. Phillips wrote or co-wrote the majority of the lyrics in the album. It acquired a platinum certification from the Recording Industry Association of America (RIAA) in 2013.

Phillips auditioned for the reality competition show ‘American Idol’ in Savannah, Georgia, and performed Stevie Wonder’s ‘Superstition’. He then moved forward into the top 13 semi-finalists. Additionally, he performed one of Dave Matthews’ songs, ‘The Stone,’ and the audience, as well as the judges, found similarities between his and Dave Matthews’ singing style.

He eventually advanced to the Top 3 finalists round. He delivered Bob Seger‘s ‘We’ve Got Tonight’ and later advanced to the finale along with Jessica Sanchez. The highlight of Phillips’ career so far was his stint in the ‘American Idol’ show. This is where he earned an identity in the show business.

Moreover, his debut studio album ‘The World from the Side of the Moon’ was a huge success. It not only earned him a platinum certification in the United States and Canada but also witnessed sales of over a million copies in the country itself. The album debuted at No. 4 in the Billboard 200.

Nomination and Net Worth

Phillip Phillips has an estimated net worth of around $3.5 million and he has earned that sum of money from his professional career.

This popular singer has not been in any rumors and controversy to date.

Phillip Phillips has a height of 5 feet 11 inches and he weighs is 72Kg. Phillip’s hair color is light brown and his eyes color is blue.