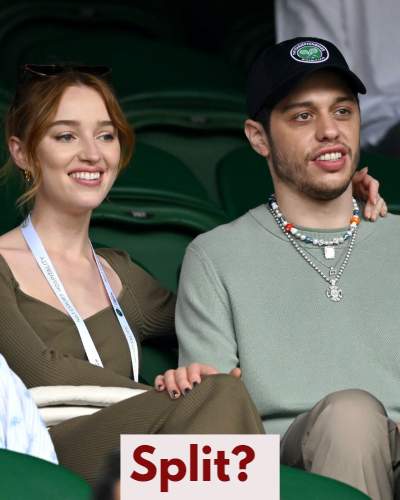 Just after a few months of sparkling the headlines of their romance, Pete Davidson and Phoebe Dynevor are splitting up. The couple was enjoying their long-distance romance at the beginning of this year.

Pete and Phoebe traveled to the UK and New York city back and forth. The news of them dating made headlines after someone saw them holding hands and hugging. However, their romance came to end because of their long-distance.

The couple put the end to their relationship after having difficulty due to the distance. As they both have a growing and busy career due to which long-distance did not work for them. The insider close to the couple has confirmed the news of their split.

“The distance put a strain on the relationship and it made it hard to maintain. had a great time while they were together.”

Pete and Phoebe made headlines several times earlier this year. On the other hand, both of them never publicly discussed their budding romance. Back in July, they made a debut as a couple at Wimbledon in London.

They cuddled in the stands while watching the game while Davidson kissed her forehead.  The insiders also added they had a lot in common and the couple is cute together.

Prior to this relationship, Pete proposed to the American singer, Ariana Grande. He also made headlines in the past with his sparked romance with Kate Beckinsale, Kaia Gerber, and Margaret Qualley. However, he strictly denied the speculations saying everything is strictly professional.

At the time, he stated:

“There was so much pressure on us to get it right that it was all about the work. We have a really professional working relationship. I’m glad for that, actually. It would be very complicated if it went further.”

In 2017, she sparked romance headlines with “Skins” star Sean Teale. The rumors started after they arrived at a premiere of “Snatch” in early 2017 together.

They also posted so many photos of one another on their Instagram profiles until the summer of 2017. Though they never revealed when they broke up, fans believe they broke up at the end of 2017.

Pete Davidson is an American actor and comedian. People mostly recognize him as the cast member on ‘Saturday Night Live. Additionally, he has also appeared in MTV shows including ‘Guy Code’, ‘Wild ‘n Out’, and ‘Failosophy’. See more bio…