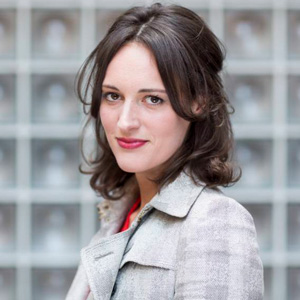 I'm a huge fan of basically anything written about complicated, contradictory women. I'm drawn to them really quickly

I suppose every time [something bad happens], I have that instinct to make that joke that distracts

I have a real aversion to sentimentality, but I also really want to write about love and friendship.

Phoebe Waller-Bridge is married to Conor Woodman. Currently, Waller-Bridge lives in Kensal Rise, London with her husband. There is no information on her wedding date and details. The couple does not have any children.

Currently, she is married to Conor Woodman and lives happily with her husband.

Who is Phoebe Waller-Bridge?

Phoebe Waller-Bridge is an English actress, writer, playwright, and director, active on stage and on television.

She studied at St. Augustine’s Priory, a Catholic Independent School for girls in the London Borough of Ealing, followed by the independent sixth form college DLD College London. Previously accepted at Trinity College, Dublin, where she planned on studying English, Waller-Bridge graduated from the Royal Academy of Dramatic Art in London.

There are no exact numbers of her Salary as well about her Net worth.

Phoebe Waller-Bridge made her acting debut in the Play Roaring Trade at “Soho Theatre”. She appeared in the second season of drama Broadchurch. In addition to acting, Phoebe is a playwright. Her work includes the series of Good, Clean, Fun, and Fleabag. In 2013, she starred in one episode of Bad Education as “India”.

In 2016, Phoebe Waller0Bridge wrote and starred in two sitcoms, Channel 4’s Crashing and BBC Three’s adaptation of Fleabag. Following its initial release on BBC Three, Fleabag was broadcast on BBC Two starting in August 2016. It was picked up by the on-demand Amazon Video service and premiered in the United States on September 2016.

Phoebe Waller-Bridge is the co-artistic director, with Vicky Jones, of DryWrite Theatre Company. The two met and became friends while working on a theater production. In early 2017, it was announced that Waller-Bridge will appear in the currently untitled Han Solo film.

Looking for the physical presentation of Waller-Bridge’s, Her height is noted to be 5 feet 9 inches and she weighs 58 kg with an amazing body shape. She has dark brown hair color and brown eye color.

Phoebe Waller-Bridge: Her wonderful TV series, her opinions about female roles in popular cinema and how it all started for her….: Read on for more!